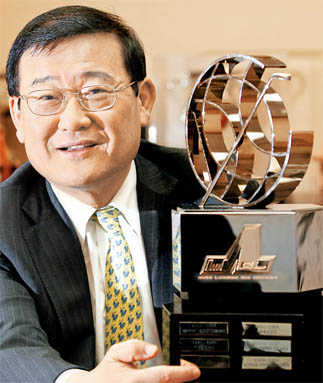 Chung Mon-won, chairman of the Halla Group and owner of the Anyang Halla ice hockey team. By Cho Yong-chul

For some, it’s the slap shots and the sheer adrenaline, for others, it’s the contrast between the spontaneous violence and the graceful elegance of the skaters as they rush the ice. No matter what the attraction, ice hockey is a serious affair for fans in many countries around the world.

Before the United States and Canadian men’s hockey teams met in their final gold-medal game at the 2010 Vancouver Olympics in March, White House press secretary Robert Gibbs and Dimitri Soudas, the spokesman for the Canadian Prime Minister’s Office, made a bet that the man whose team lost would have to wear the jersey of the winning team in public during a press briefing. When the Canadian team won the game, Gibbs donned the Canadian jersey and went on camera as promised.

In Korea, such devotion to ice hockey is only seen in small pockets of the country, and in fact there are only two professional ice hockey teams in Korea - the Anyang Halla and the Gangwon High1.

But one man is doing what he can to keep the sport alive and help it develop.

Chung Mong-won, chairman of the Halla Group and the owner of the Anyang Halla club, has been a fierce advocate of ice hockey in Korea for the last 16 years.

Chung recently won a major victory in his fight to promote ice hockey in this country.

The Asia League is a professional ice hockey league in East Asia and consists of seven teams from South Korea, China and Japan.

At the tournament, the Anyang Halla defeated Japan’s Nippon Paper Cranes with a goal in sudden-death overtime in the last game of a five-game series.

Halla is the first Korean team to win the competition since the league’s founding in 2003.

“At the moment the winning goal was made, I felt an indescribable joy,” Chung said.

The chairman founded the hockey team in 1994 when he was president of Mando Corp., Korea’s second-largest automotive parts manufacturer.

Chung is an ice hockey maniac who not only goes to home games in Anyang, Gyeonggi, but also follows the team to away matches. He says he is fascinated with the speed and excitement of the game.

But there have been difficulties. He even had to disband the team during a financial crisis in 1997.

“At the time, I heard many people asking whether I should continue to own a team that needs so much financial aid every year,” said Chung.

But the team had won several tournaments in Korea, and he couldn’t let it break up.

“I derived a lot of strength from the performance of the team, despite the hard times,” he said. “I decided to support the team to the end.”

Chung says that the businessman in him also learns a lot of things from hockey that can be applied to business management.

“The playoff series is definitely different from the regular season, and what’s required in the post-season is willpower and concentration,” Chung said. “Similarly, I realized that the fate of a company is also determined by its ability to maintain its focus in difficult times.”

Chung’s devotion to his team is clear. He says each player is like a son to him, and he keeps track of important dates, such as birthdays and anniversaries.

“I try to help the players and give them opportunities to play for overseas clubs,” he said.