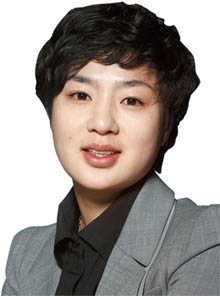 “I don’t think being the first female jockey should be a burden,” Lee said. “It’s something to grab hold of, and I enjoy the process of working for it.”

Her passion for the sport started when she visited Seoul Race Park with her family in 1998.

“That was the first time I had ever seen a horse race. The jockeys left a lasting impression on me,” Lee said. “It was also a time when I was worried about my career and I thought it wouldn’t be too difficult to do because I was pretty athletic.”

Lee decided to apply to be a jockey with the Korea Racing Authority during her freshman year at Dong-A University in 1999. After being admitted, she immediately dropped out of college, went through two years of training and debuted as Korea’s first female jockey in September 2001.

“There weren’t many chances for me to ride because I’m a woman. I had a difficult time due to prejudice,” Lee said. “Even if I won, others would say ‘anyone can win with that horse,’ or when I wasn’t ranked high enough I heard ‘the horse was fine, the problem was the woman riding it.’ Once, I even punched a guy for insulting me.”

Lee is now known as a successful jockey, but she hasn’t stopped there. Just last month, she became Korea’s first female horse trainer - earning the highest score on the licensing exam and beating the 35 other applicants, all male, was just the cherry on top.

“I’ve been preparing for this exam ever since I became a jockey,” Lee said. “It’s only natural for players to become coaches when they retire.”

Lee admits that she had a head start on her career as a trainer, which one can apply to do only after eight years as a jockey, earlier than the others.

“I took the test the year I was given permission to apply, but I passed,” Lee said. “I wanted to get my trainer license first and then continue my career as a jockey, but I didn’t want to miss out on a great opportunity.”

The job of a trainer is to sign up with a horse owner, train the horse and choose which jockeys ride the horse. He or she has to deal with the owners while also directing and coaching a team of jockeys.

“The job itself is more difficult than that of a jockey but I’m ready for anything,” Lee said.

She went on to talk about the difficulties she faced as a jockey.

“Not being able to eat everything I want in order to keep in shape is agonizing,” she said. “And accusations of fixed races are always hard to deal with.”

Despite the hardships, she said she has appreciated the benefits.

“Being a jockey gives you a lot of personal time. Excluding Saturdays and Sundays when there are matches, weekday training sessions begin and end early ... Also, I love animals and it is a blast to work with horses.”

One of Lee’s main concerns is that the Korean racing community is far behind international standards. There is very little chance for Korean jockeys to be active in foreign countries and high-quality horses and jockeys don’t often come to Korea.

“Being a jockey and a horse trainer is a very attractive job,” says Lee. “Although I had a hard time since I didn’t have any female jockeys to look up to, I will do my best to be an excellent example and I hope that my female peers can do even better.”