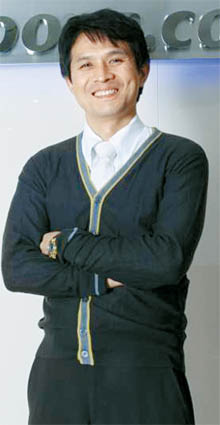 It’s something that almost everyone dreams of - making money doing the thing you love.

In that sense, Jang Seong-deok, CEO of OK Outdoor (www.okoutdoor.com), is a truly blessed entrepreneur. OK Outdoor is an online shopping mall specializing in gear for mountain climbing, camping and other outdoor activities. It also has several retail outlets around the city.

Jang is an all-around sportsman - often going hiking or mogul skiing and participating in mountain marathons and Ironman Triathlons.

After graduating from Nihon University, the largest university in Japan, Jang joined Samsung C&T Corporation. In 2000, he started his own business, OK Mountain (the predecessor of OK Outdoor) with 50 million won ($44,166) in capital and a 33 square-meter (39 square-yard) office space.

While he certainly enjoys what he is doing, Jang is serious about his business.

At first, Jang’s Web site just provided information. But not long after the site expanded to include sales of outdoor gear. It was a gamble. After all, many Korean entrepreneurs have jumped into the online shopping business in recent years, but only few have survived and really flourished.

“I had to kill two birds with one stone - maximizing my profits, yet attracting customers with affordable goods,” Jang says. He reminisced about how in the early years he would collect empty boxes from fish markets to use for mailing the products.

“By simplifying distribution process, I could buy foreign brands cheaply and sell them at low prices to my customers.”

Jang’s Web site is also known for its excellence in customer service - especially its after-sales service - all in the hope of transforming customers into regulars.

For instance, OK Outdoor provides a free mending service for hiking clothes for at least three years. As an avid hiker himself, Jang is well aware of what hikers go through in their adventures.

So far the results have been quite impressive. In just six years, Jang’s OK Outdoor has become the leader among online shopping malls specializing in mountain climbing, camping and other outdoor gear.

Without any investment from outside, its sales have grown an average 200 percent every year. It raked in 19.6 billion won in sales in 2008 and about double that - 41.7 billion won - last year, with Jang expecting yet another banner year this year with sales projected to be around 100 billion won.

With a keen eye for the changing trends in outdoor activities, Jang is now focused on bicycles.

“This year we will strengthen and diversify our bicycle selection and bicycle-related items,” Jang said.

To mark the tenth anniversary of the company’s foundation, Jang has also published a book on his secrets to success, titled “There is No O.K. at OK Outdoor.”

“I wanted to share my experience with people in their 30s and 40s who are thinking about setting up a business of their own. As the title suggests, my secret to success was to never give up, never settle for the status quo, but keep marching forward,” Jang says.