For networks, tragedy and comedy collide

For networks, tragedy and comedy collide 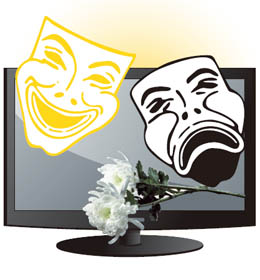 Some people believe a disaster must be met only with gravity. Others see laughter as a needed release from tragedy.

And in the wake of the Cheonan catastrophe, it’s a serious argument.

A musician and regular on the hit TV variety show “1 Night 2 Days” ignited the debate after he expressed his dismay that broadcasters took variety shows off the air as a way to mourn the victims on the sunken Navy ship.

“It’s weird,” Kim C wrote on his Twitter page. “Sports, movies and dramas are O.K., but why not variety shows?”

Another singer, Kim Jang-hoon, said in an interview with a local Internet news agency Thursday that “variety shows should be telecast in times like this.”

“It’s very sad but the survivors are also in need of something that can give them courage,” said Kim, who’s been in the entertainment industry for the past 19 years.

“We all know it’s not easy to get by in a tough world, but they give people a chance to laugh. And it’s a clown’s duty to sing and make them laugh.”

“How dare you say so?” wrote Joo Jeong-hun on 1 Night 2 Days’ official bulletin board on Wednesday. “In times like this, everyone should keep a low profile even if they are not related to the victims.”

But viewer Kim Jae-woong wrote, “My sole pleasure these days is watching variety shows. Why are they the only things that go off the air?”

“The entire nation might suffer from depression,” added another viewer, Park Na-rae.

One problem: Few of the viewers understand the broadcaster’s standards. The variety shows were replaced by TV dramas about betrayal, adultery, violence and revenge, and even movie comedies such as “7th Grade Civil Servant” (2009) or “The Relation of Face, Mind and Love” (2009).

“This is a complicated issue. What matters most is that the broadcasting stations do not really have rules; they’re just afraid of offending public opinion,” said Won Yong-jin, a professor at Sogang University.

While MBC and KBS completely suspended their variety shows, SBS aired “Star King” - on which ordinary people compete for prizes by showing off quirky talents such as using their nose to blow out a candle - on April 4. And it came under fire quickly. During the show, news broke that the body of Senior Petty Officer Nam Ki-hoon had been recovered from the rear section of the sunken vessel. The network streamed subtitles carrying the news while the show went on.

Viewers flooded the show’s Web site with complaints. And that was enough for SBS. It has canceled almost all of its variety shows since then.

Korea isn’t the first country to face the question. In the United States, TV entertainment went dark after the Sept. 11 terrorist attacks. In one of the first major breaks from days of horrific news, on Sept. 29, 2001, New York City Mayor Rudy Giuliani gave audiences permission to laugh again in a memorable appearance on “Saturday Night Live.”

“Can we be funny?” producer Lorne Michaels asked the mayor.

It isn’t the first time Korean broadcasters have been faced with a difficult call, either. When former President Roh Moo-hyun passed away, as most channels aired the breaking news, KBS 2TV ran its regular programs, including a variety show. Then, too, the criticism was swift and harsh.

So what about this weekend? Will regular programming resume?

With variety shows attracting high audience shares - and with them, hefty advertising revenues - it’s unlikely the broadcasters really want to cancel them.

As of yesterday, with news about the Cheonan tragedy continuing to break daily, the three major broadcasters remained undecided.

“We plan to broadcast regular variety programs as scheduled for this weekend, but if anything big comes out, they will be canceled for sure,” said an official at SBS who declined to be identified. “We didn’t broadcast variety and entertainment shows when Roh Moo-hyun and Kim Dae-jung passed away, but this is the first time for us not to air variety shows for such a long time.

“Although we air talk shows and some other shows which are not that hard-core funny, I doubt whether this is the right way to pay our condolences, because some people are waiting for these variety shows.”

MBC employees are on strike, making the question moot there, but KBS is also adopting a wait-and-see attitude.