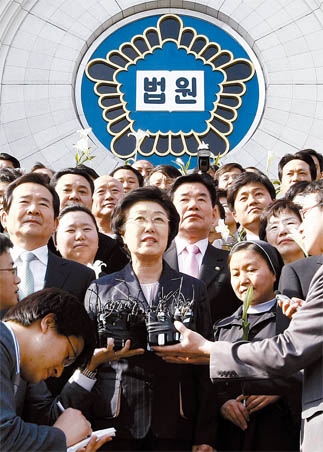 Former Prime Minister Han Myeong-sook has been acquitted of bribery after the Seoul Central District Court questioned the veracity of key testimony that was changed in the course of the trial.

The court said yesterday that prosecutors had no proof of their charges against Han other than the testimony of Kwak Young-wook, former CEO of Korea Express and the accused bribe-giver.

“While Kwak’s testimony is the sole evidence, it is not reliable,” said Judge Kim Hyeong-du, who headed the three-judge panel of the Seoul Central District Court in charge of the trial.

The court also said the prosecution failed to prove its argument beyond a reasonable doubt and presented only circumstantial evidence of bribery.

Pointing to inconsistencies in Kwak’s testimony, the court’s ruling hinted that prosecutors had twisted Kwak’s arm to speak unfavorably about the former prime minister.

“Kwak appeared to have given testimony that was inconsistent with his memory in order to escape from a predicament,” Judge Kim said, adding that the prosecution’s nighttime interrogation of Kwak could have influenced his accounts.

“There is a possibility that Kwak accommodated the prosecution in order to avoid a distressing situation,” Kim said.

The Seoul Central District Prosecutors’ Office said yesterday it will appeal the ruling.

In a press conference after the trial, Han welcomed the acquittal.

“I appreciate the court for laying bare the truth,” she said. “No one should have to suffer an unfair political attack like I had.”

Perhaps referring to the second, newly opened corruption probe against her, Han said she “won’t be killed by the malicious power.”

The prosecution indicted Han on Dec. 22, 2009, charging that Kwak paid her $50,000 in 2006 in return for helping him win a job. Kwak initially told the prosecutors that he had handed Han two envelopes containing the money after a luncheon at the prime minister’s residence on Dec. 20, 2006, but he changed his account when he took the witness stand on March 11.

At that time, Kwak said he had left the envelopes on a chair in the prime minister’s residence, forcing the prosecution to revise its indictment against Han.

Han was held up as the model of integrity in the Roh Moo-hyun administration when she served as prime minister from April 2006 to March 2007. The prosecution had sought a five-year prison term and a criminal fine of $50,000 against her.

The court ruled that it would have been physically difficult for Han to receive and hide the money shortly after the luncheon. In this first-ever influence-peddling trial against a former prime minister, judges made an unprecedented on-site inspection of the prime minister’s residence to verify the prosecutors’ and the defense attorneys’ contradicting versions of the event.

Prosecutors reacted angrily to the acquittal.

“The court was unfair to the prosecution throughout the trial, and our worst nightmare came true,” said a source from the Supreme Public Prosecutors’ Office. “The court tried to control our questioning of Han during the trial, and key witnesses were given our questions before they took the stand.”

While Han was acquitted, the court convicted Kwak of embezzling 3.74 billion won ($3.3 million) from Korea Express while he was working as its court-appointed president. The court, however, acquitted Kwak of charges that he bribed Han. Kwak was sentenced to three years in prison.

The reactions of the ruling Grand National and the opposition Democratic parties were clearly divided. The Grand National Party said the court had to acquit Han because while it had doubts, the prosecution lacked physical evidence. The party also said Han had been proven dishonest during the course of the probe and trial.

The Democrats welcomed the acquittal, calling it a victory for the truth. Democratic Party spokesman Noh Young-min also urged the prosecution to end “political attacks” ahead of the Seoul mayoral election by calling off the new investigation against Han, launched Thursday. Han made public her bid for the post in February.