Hoof-and-mouth breaks out again in Incheon

Hoof-and-mouth breaks out again in Incheon 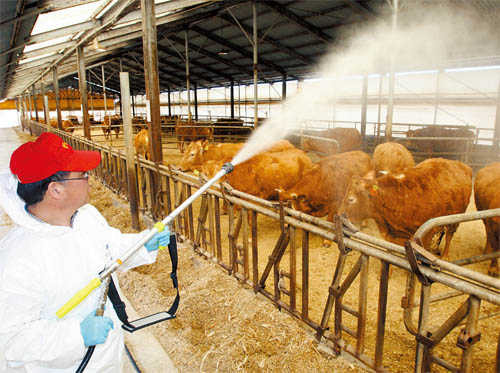 Slightly more than two weeks after the government declared Korea “clean” from hoof-and-mouth, another outbreak of the disease was confirmed yesterday at a cattle farm in Incheon, west of Seoul.

The news deals a blow to Korea’s plan to resume exports of pigs, cows and other livestock as early as September.

And the Agriculture Ministry said it will shut down all cattle wholesale markets across the country as a safety precaution until investigators determine the cause and course of the latest outbreak.

“All nine cows suspected of being infected registered positive in the National Veterinary Research and Quarantine Service test,” the Agriculture Ministry said yesterday. Animals within 500 meters of the farm - some 180 cows at the farm itself, along with 384 cows, 2,200 hogs and one deer at nearby operations - will be culled.

Yesterday’s announcement came only 16 days after the ministry declared Korea free from the disease, whose outbreak in January led to the slaughter of nearly 6,000 animals, including cows and hogs in Pocheon, Gyeonggi Province.

Officials said the two outbreaks appear to be unrelated, as the virus in the current outbreak is based in type-O blood, while the January outbreak struck animals with type-A blood.

According to investigators, the owner of the Incheon cattle farm recently traveled to China and is importing cattle feed from the country, but they said the cause of the latest outbreak has not yet been determined.

All areas within 10 kilometers of the Incheon farm have been quarantined and designated for special monitoring, and the local health authorities lifted their disease alert rating from blue, the lowest level among the four-phase alert system, to yellow, the next phase.

The January outbreak of hoof-and-mouth disease, which started in Pocheon and afflicted six farms across the Gyeonggi region, caused 42.5 billion won ($38 million) in financial damage. The government said in March it would officially request in June that the World Organization of Animal Health redesignate Korea as a “clean country,” an initial step to resuming exports of its livestock.