STALEMATE AT THE 38TH PARALLEL
Recapturing Seoul for the final time 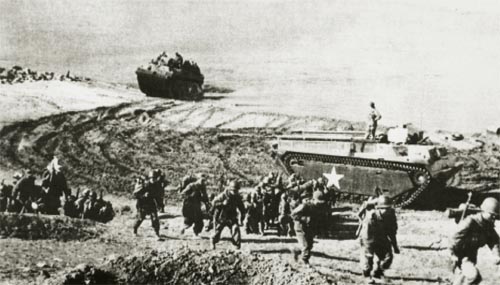 The ROK 1st Division entering the outskirts of Seoul following an amphibious landing across the Han River on March 15, 1951 under the command of Gen. Paik Sun-yup. Provided by Paik Sun-yup


Last week, General Paik wrote how the UN and South Korean forces defeated the Chinese at Jipyeong-ri. The victory revealed the weaknesses of the Chinese forces.


"Operation Killer" was launched on Feb. 21, 1951 with the objective on restoring the allies' lines and pushing the Chinese northward. The U.S. 1st Corps moved on the far western sector of the front while the U.S. 25th Division was located on the right flank, going on to later capture the Namhan Fortress, a short distance southeast of Seoul. Meanwhile, the U.S. 9th and X Corps operated in the central front, making their advance in a line that ran from Paldang to Hoengseong.

The operation was a success and my division reached the south bank of the Han River, where we dug in and waited for other units to arrive and form a unified front before we started our final push into Seoul.

Once all units were in place, we would advance toward the 38th Parallel. With a light spring breeze in the air, "Operation Ripper," commenced on March 7, 1951. The 25th Division crossed the river after artillery fire had softened up the opposite bank. The division led the way to Pochon. To the east of my unit, the U.S. 3rd Division crossed the Han and headed straight for Uijeongbu. Nevertheless, the orders for the ROK 1st Division to advance didn't come. Looking across the Han River to Seoul, it was frustrating to do nothing and watch the others move in. But there was a cold calculation behind this. General Ridgeway didn't want to go in and then get attacked by the remaining enemy forces. Avoiding costly street fighting had become an important objective. Thus the role of the 1st Division was to conduct deceptive operations that would pin down enemy forces and prevent the deployment of these forces to other areas. In order to convince the enemy, the UN naval command engaged in a similar mission. Naval vessels started to clear sea mines from the maritime approaches to the city of Jinnampo, trying to create the impression that an amphibious landing would take place in that area. It was then that Brig. Gen. Thomas Harrold came to see me so we could consult on the upcoming operation. Riding in a jeep to the crest of a hill, a sudden muzzle flash from the far side indicated rifle fire coming toward us. Bullets were flying and we both took cover. It was very clear that the enemy was opposite us.

Starting on March 10, my unit was supplied with river-crossing equipment, including a battalion of amphibious vehicles and rubber boats. We also were trained in street warfare. At the same time we inserted a small reconnaissance unit into Seoul. A report that came on March 14, 1951, especially caught my eye. Our reconnaissance unit reported that enemy forces were withdrawing. U.S. units on the central front had seized the railroad line connecting Chuncheon and Seoul while our forces had also recaptured Hongcheon. I immediately reported the findings to my corps commander and asked for permission to cross the Han River. Upon hearing the news, General Milburn didn't hesitate for a second and told me, "Go ahead!" 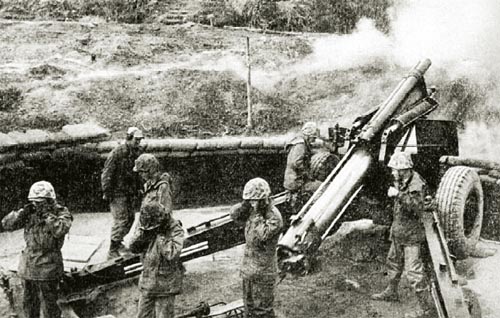 The U.S. military deploys artillery in central Seoul to stop a threatened attack by Chinese forces to retake Seoul in April 1951. The effort proved successful. Provided by Paik Sun-yup

Finally on the morning of March 15, we crossed the Han River, moving from Yeouido to Mapo and then into the center of Seoul.

After three months of occupation by the enemy, we had finally recaptured Seoul. ROK Defense Minister Shin Sung-mo came to the riverbank to watch the crossing. Finally, tears flowed down his cheek in what was a very emotional moment. Minister Shin had a reputation for shedding tears, but I found myself fighting to hold back the tears as well.

We got into a jeep and used a Landing Craft Mechanical to cross the Han River. What we found was a city in ruins. Land mines were exploding here and there. There were a few people who greeted our troops with waving flags, but they looked tired and wore blank expressions on their face. An estimated 200,000 people had remained in the city while Chinese forces had occupied it. Most of them had starved and suffered from illness. It would not be an exaggeration to say that most of them looked like beggars. Since the war broke out, our capital Seoul had suffered greatly and had become a dead city.

Still, Seoul was the heart of the country and carried great significance. This view was shared by some foreigners. When General Ridgway replaced Gen. Douglas MacArthur in Tokyo as the chief UN commander, the Chinese had just started to launch an offensive. It was April of 1951. Seoul was being threatened again. He told me that we had the option of withdrawing to the south of the Han River if it came to it.

Nevertheless, Gen. James Van Fleet, who had just taken command of the 8th U.S. Army and was in charge of defending Seoul, mobilized 400 artillery pieces and placed them along a line that started from the center of the city all the way to Mapo and told reporters covering the U.S. 8th Army that Seoul would not be lost again. He told the reporters that Seoul was the heart for all South Koreans and that it could not be lost for a third time. I felt very thankful toward this foreign general who seemed to understand the symbolic meaning of Seoul and through this resolve that is how Seoul stayed in our hands for the rest of the war.