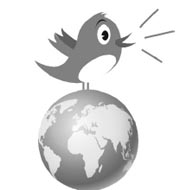 On Wednesday afternoon, Korean Twitter accounts were aflutter, forwarding a message from someone’s profile page by using the “retweet” function via mobile phone. The message read: “When I met a junior working at Samsung Electronics today, he said with pleasure that the iPhone would soon go downhill. So, I asked him whether he had ever used one. Then he told me that he never did.” The author added: “I hope a product that can beat the iPhone will be developed by a Korean company soon. It seems, however, that Korean businesses are only interested in how many mobile phone units they can sell.”

On Thursday, it was revealed that the author of the message, at first thought to be an ordinary Internet user, was Chung Yong-jin, vice chairman of Shinsegae Group. Chung later commented, “It was only a conversation between twitterers. It seems too much emphasis was put on the aggressive expressions.”

Still, the episode made him a popular Twitter user, with 4,000 followers in one night.

Twitter, a social networking tool that enables a user to exchange short messages of up to 140 characters with an unspecified number of people, started its service in March 2006 when its founder, Jack Dorsey, sent his first message using the site.

People’s reaction to the tweets posted by Chung has shown that Twitter is a revolutionary change in communications. It has never before been possible in the world for such top celebrities like the Dalai Lama, the famous dramatist Kim Soo-hyun, Steve Jobs and Gu Hara of the pop group KARA to communicate with ordinary Internet users directly. Of course, the speed is unprecedented too. At the trial of former Prime Minister Han Myeong-sook on Friday, several users with fast fingers tweeted the scoop ahead of any of the news media.

But even more important than the tool is, of course, the will to understand it. If King George III had been able to tweet, “How would a tax on tea in the colonies be received?” and read the replies of the people before the Boston Tea Party, just how different would the history of the United States be?

I wonder whether President Franklin Roosevelt of the United States, who famously communicated with the people through his fireside chats over the radio during his presidency from 1933-1945, might regret in heaven that Twitter was not available during his time on earth.