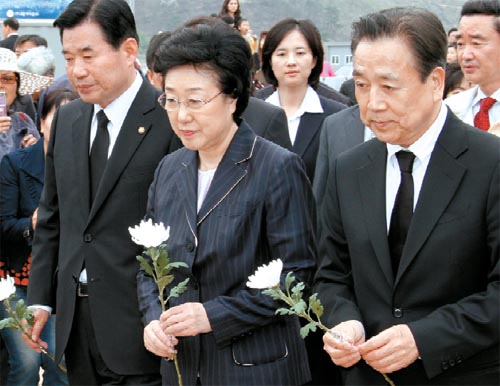 Former Prime Minister Han Myeong-sook, center, lays a flower at the grave of the late former President Roh Moo-hyun on Saturday after a Seoul court acquitted her of bribery. She has begun gathering Roh supporters for a campaign to run for mayor of Seoul in June. [YONHAP]


With a bribery acquittal behind her, former Prime Minister Han Myeong-sook took steps over the weekend to unite loyalists of the late President Roh Moo-hyun ahead of the June 2 local elections, in which she will run for the Seoul mayoralty.

Supporters of Han held a press conference yesterday at the Roh Moo-hyun Foundation in Seoul, demanding President Lee Myung-bak’s apology and dismissal of the justice minister and the prosecutor general over “wrongfully accusing Han.”

“The prosecution is not repenting over what it did. Instead, it has launched a new probe against Han,” said Lee Hae-chan, another former prime minister who heads Han’s supporters’ group.

The Democratic Party also intensified its attack on the government and ruling party ahead of the elections. “The prosecution attacked Han to damage her image because she is a strong contender of the Seoul mayoral election,” Woo Sang-ho, the DP’s spokesman, said. “The ruling side will face a serious defeat in the elections as the people will judge their candidates.”

Han, a symbol of integrity in the Roh administration, was acquitted Friday of charges she had taken bribes from a local businessman while she was prime minister. On Saturday, she visited the hometown of Roh, laid a flower at the late president’s grave and met his wife.

Accompanied by former officials of the Roh administration, Han said: “After the hard-earned acquittal, I thought I must visit the late President Roh’s grave. The people failed to protect Roh, but Roh apparently protected me.”

After his presidential term ended in February 2008, Roh’s family and close aides faced prosecutors’ investigation on charges of receiving bribes. The former president killed himself on May 23 of last year, shortly after he was summoned by the prosecution for questioning.

“As I visited Roh’s grave, I was determined that I must make a world without political attacks,” Han said.

The Grand Nationals have feared that the first anniversary of Roh’s death, which falls days before the elections, would prompt Roh loyalists to unite and vote for the DP candidates.

“The more voters think Han was persecuted, the deeper our predicament will be,” a senior GNP official said.

While both the GNP and DP have not selected their official candidates for the Seoul mayoral election, Han is considered as the most likely DP candidate.