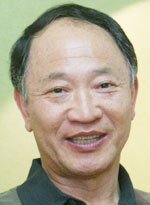 Yoon Duk-yong, professor emeritus at the Korea Advanced Institute of Science and Technology, has been named the civilian head of the joint military/civilian team probing the sinking of the naval ship Cheonan.

The Ministry of National Defense announced yesterday Yoon will join Army Lt. Gen. Park Jung-yi, the military chief of the team, to determine the cause of the sinking of the Navy ship last month.

Moon Byung-ok, spokesman for the investigative team, said the team is made up of 130 individuals, including about 30 civilian experts.

“We’ve brought in civilians specializing in vessels and in explosives,” Moon added.

Yoon, 70, has been professor emeritus at Kaist’s department of materials science and engineering since 2005. From 1995 to 1998, Yoon was the head of the institute.

In 2004, Yoon received the presidential Korean Scientist of the Year honor for his research on interface phenomena during ceramic processing.

Of the seven Americans, three are active servicemen and the rest are civilians working in the navy, Moon said.

Last week, the ministry announced that experts from the United States, Australia, Britain and Sweden would aid the Korean probe. Operations to salvage the 1,200-ton ship continued yesterday.

The Navy could lift the sunken bow and stern of the Cheonan by this weekend.