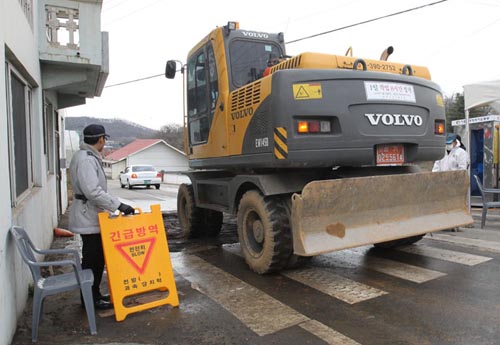 The military heavy equipment is mobilized yesterday to bury culled farm animals in Ganghwa, Incheon, in the aftermath of the foot-and-mouth outbreak. [YONHAP]

South Korea has found four more cattle and pig farms positive for foot-and mouth disease since it confirmed the first case at a cattle farm on Ganghwa Island, 58 kilometers west of Seoul, on Friday.

The latest confirmations come after Seoul officially declared that it was “clear” of the disease on March 23 after 5,956 animals were destroyed in the country at a cost of 42.5 billion won (US$37.9 million). The announcement was made after this year’s first outbreak of the disease was confirmed on Jan. 7 in Pocheon, 45 kilometers north of Seoul.

The country had hoped to regain its “foot-and-mouth-free status” from the Paris-based World Organization for Animal Health around September if no new cases occurred so it could start exporting meat such as pork.

The Ministry for Food, Agriculture, Forestry and Fisheries said it will complete by Monday culling 16,000 farm animals at 140 farms around the affected zone to control the disease from spilling.

The ministry expanded Saturday the target area for the preventive culling to a 3 kilometers radius of an affected farm, from the previous 500 meters, and also raised its crisis alert level to orange, the second-highest out of four stages.

The ministry has installed roadblocks to control human and vehicle moving in and out of the affected Ganghaw area and is disinfecting farms and vehicles.

The agricultural authorities, meanwhile, issued a release saying humans are safe from the disease, which only affects animals.