Ashes dug up from the dust

Ashes dug up from the dust 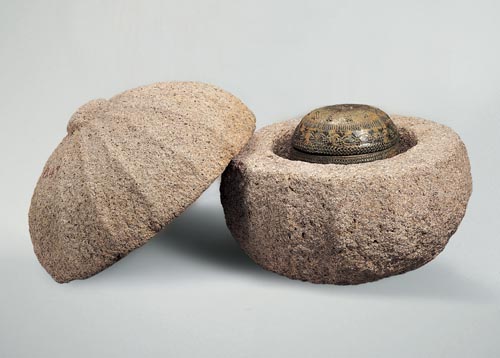 After Buddhism was introduced to the Korean Peninsula, the people of Unified Silla (668-935) began cremating their dead instead of using traditional Korean tombs. Funeral urns like these began appearing to hold the ashes, which were then buried in a shallow grave. In fact, this method of cremation was already in use before the unification of the Three Kingdoms, but it was only after unification that the ruling class adopted cremation.

Here, the inner urn was glazed then fired, and flower prints were stamped on the exterior. The outer stone urn was carved angularly.

These funeral urns, which are National Treasure No. 125, were looted by the Japanese during the colonial period but were returned to Korea on the occasion of normalization of diplomatic relations between Korea and Japan.