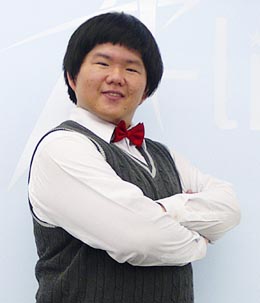 A video of the Taiwanese man Lin Yu-chun, 24, singing “I Will Always Love You” is making a splash online. Reuters

He’s everything Whitney Houston is not - Taiwanese, male, chubby and unknown - but Lin Yu-chun is being likened to the pop diva after wowing a talent show with his rendition of one of her most popular songs.

Lin, a competitor on popular singing show “Super Star Avenue,” floored the judges this week with his pitch-perfect rendition of Houston’s “I Will Always Love You,” taken from her film “The Bodyguard” that also starred Kevin Costner.

The video can be accessed through simple search for Lin’s name on YouTube.com.

The 24-year-old, who wears a bow tie and sports a bowl haircut, is also being touted by many bloggers as this year’s Susan Boyle, the best-selling artist who unexpectedly became a musical superstar after her show-stopping performance on the “Britain’s Got Talent” TV program.

“Close your eyes and tell me - have you forgotten you’re listening to a reality show and started to think you’re hearing The Bodyguard,” wrote CNN’s news blog editor Mallory Simon about Lin’s performance.

Like Boyle, Lin has become an overnight Internet sensation, with videos of his performance retrieved by thousands of people. He is also tipped to take home the Taiwan talent show’s top prize of $1 million.

Boyle, 48, was unknown before her appearance on the talent show last April, but her debut album “I Dreamed A Dream” was crowned Britain’s biggest selling record of 2009 along with Lady Gaga’s “Poker Face.”

“I Will Always Love You” was written by U.S. singer Dolly Parton in 1973, who released it a year later as a single. Houston’s 1992 version become one of the best-selling singles of all time.