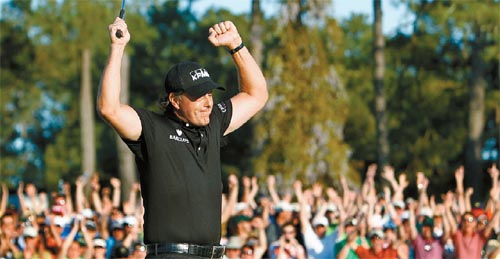 AUGUSTA, Georgia - Phil Mickelson won his third Masters title, shooting a 5-under 67 Sunday to pull away for a three-stroke win over England’s Lee Westwood.

Already a fan favorite and the sentimental pick as his wife and mother battle breast cancer, Mickelson rolled in a 15-foot birdie putt at the signature 12th hole. He then managed a stunning shot off the pine straw and around a tree to set up another birdie at the next hole. Mickelson wrapped it up with yet another birdie at the 18th, then headed to the side of the green to hug his wife, Amy.

“To win this tournament, it’s the most amazing feeling,” Mickelson said. “This has been a special day. I’ll look back on this day as very memorable, something I’ll always cherish.”

Westwood, Mickelson’s playing partner in the final group, led for 54 holes. He was third in the last two majors, the British Open and PGA Championship.

“Phil, being the champ he is, just hit some great shots down the stretch,” Westwood said. “He’s been through hard times recently. He deserves a break or two.”

Anthony Kim finished third with a 7-under 65 that sent him to the clubhouse clinging to the hope that Mickelson would falter, but Lefty wasn’t going to throw this lead away.

Top-ranked Tiger Woods was among the contenders who faded away, struggling all day with a shaky swing off the tee and never making a serious push for the lead. He finished with a 3-under 69 and 11-under 277, tied with South Korea’s Choi Kyung-ju for fourth.

“That’s not what I wanted,” said Woods, playing for the first time since the sex scandal last fall severely damaged his reputation. “I wanted to win this tournament. As the week went along, I kept hitting the ball worse. It was not very good.”

His highlight was holing out from the seventh fairway for an eagle, and he had another eagle at the 15th, but an inexplicable three-putt bogey from about 6 feet at the 14th doomed his chances. He was four strokes behind Mickelson. 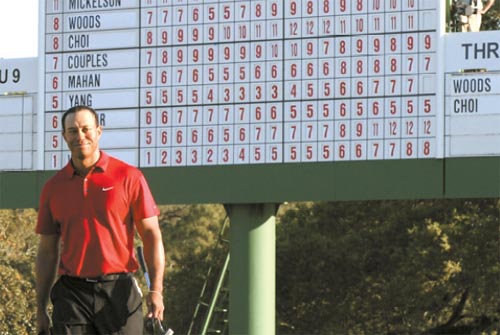 Tiger Woods walks up to the 18th green during the fourth round of the 2010 Masters Tournament at Augusta National Golf Club in Augusta, Georgia. [AFP/YONHAP]

Woods wasn’t the only one to feel Augusta’s bite. Fifty-year-old Fred Couples dumped a shot in the water at the 12th, leading to a double-bogey that stifled his bid to become golf’s oldest major champion. Choi looked steadier than anyone until two straight bogeys knocked him from a share of the lead to four shots behind. Kim started the day seven shots behind before surging up the board, climbing within a shot of the lead with an eagle at 15 and a birdie at 16. After closing with two pars, all he could do was watch Mickelson finish out his round in the last group of the day.

For Kim, it was his best finish in a major at the U.S. Masters.

The 24-year-old American matched the lowest score of the week, after battling to a 73 in the previous round.

“It was a very good round,” Kim told reporters after covering the back nine in five-under 31 to finish at 12-under 276, four shots behind Mickelson.

“I was happy that I hung in there and gave myself an opportunity today where if I shot something silly low, I would have a chance to win this golf tournament.

“I was very frustrated, just because I feel like I’m doing all the right things,” Kim added, referring to his wayward driving in Saturday’s third round.

“I feel like my swing is coming along and I get out there and I still can’t find the fairway. It was very frustrating yesterday but I was happy to at least get it around at one over because I felt like it could be quite a few strokes over par.”

Kim clinched his third PGA Tour title in a playoff at last week’s Houston Open and he felt that gave him an extra jolt of momentum for the opening major of the year.

“I definitely gained a lot of confidence after last week,” he said. “The attitude I had, the mind-set I was in last week, really helped me this week.

“I’ve gotten over a little hump in my golf career when I felt like things were stalling.

“If I can just get my ball striking to where it was, I’m going to be at a different level.”

Kim began Sunday’s final round seven strokes off the lead and vaulted into contention with an electrifying birdie-birdie-eagle-birdie run from the 13th. His sizzling burst ended when he rammed in a 25-foot uphill birdie putt at the par-three 16th to lie one off the pace at 12 under.

Asked if he had a particular target in mind, he replied: “I really didn’t. I knew I was coming from pretty far back and Phil’s obviously playing great. I just tried to make as many birdies as possible and fire at a couple flags. I grinded, I hung in there and I’m proud of the way I stuck it out.”