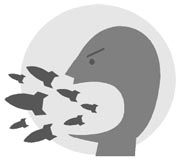 On Dec. 7, 1941, aircraft and submarines of the Imperial Japanese Navy attacked Pearl Harbor. As news of the Japanese assault spread, chaotic rumors began to circulate among the American public.

Then President Franklin Roosevelt repudiated the rumors, setting the facts straight: During the attack, 2,340 American men were killed and 1,100 injured. Only three American ships deployed in the harbor area were damaged beyond repair. It was untrue that the U.S. lost over 1,000 jets. Japan did not know how many jets they destroyed, and Roosevelt did not divulge that information. He did, however, inform the public that the number of Japanese jets destroyed was far greater than the American losses.

Roosevelt also entreated the public not to believe in all the rumors blindly, but to verify the information first. He knew that rumors could be a cancer that could bring down the people’s morale and ultimately undermine the nation itself.

His actions are an example of how a leader should stand against rumors in times of national crisis. This should be the first rule for those of us who live in an era in which the Internet produces endless rumors.

Rumors are like the tail of a lizard. Even when you sever them, they grow back. Oftentimes, they put innocent people in danger.

Why do we accept rumors? In his book “On Rumors: How Falsehoods Spread, Why We Believe Them, What Can Be Done,” Harvard Professor Cass Sunstein described one of the reasons as the “social waterfall effect.” When we make a judgment, we have a tendency to depend on the thoughts and actions of others. That’s why when the majority of the people you know believe in a rumor, you also start to believe it.

The second reason is “group polarization.” When people with the same thought get together to talk, they end up with a far more extreme version of that thought than before. And yet, they still believe themselves to be reasonable.

Consider the propagation of rumors that grow bigger as they are reproduced through blogs and message-board comments.

For example, former Prime Minister Han Myeong-sook was recently acquitted of bribery in a trial. However, there is no way to undo the “unverified information” that was already leaked during the investigation.

There has been all sorts of speculation surrounding the sinking of the Korean naval corvette Cheonan. The most radical of these rumors started from the opposition floor leader commenting that the media conference of the survivors sounded “somewhat contrived.”

Sunstein said that rumors begin when members of a community who meet with terrible tragedy try, through much speculation, to find an outlet for rage and blame. While finding an outlet might be all right, shouldn’t one verify the facts before making enormous allegations?