A year of solemn remembrance

A year of solemn remembrance 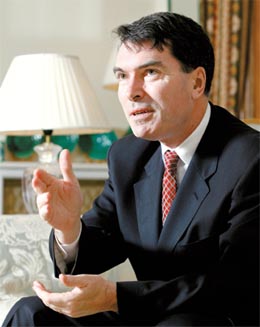 As a former host of the Group of 20 summit, Britain knows a thing or two about running the event.

And Martin Uden, the British Ambassador to South Korea, believes Seoul could be a solid host in November this year.

“Here in Seoul, you’ve got world-class facilities, a government that’s experienced in this sort of events,” Uden said in an interview with the JoongAng Daily on April 6 at his residence in central Seoul. “You’ve hosted the APEC Summit before [and] you regularly have heads of state coming through. So I’ve got no doubt about you being able to cope with it from a logistical, technical point of view.”

Uden pointed out that “substance” may be the difficult part. He noted that Seoul isn’t entirely certain of the agenda for the summit in November because of the Toronto summit held in June. But Uden also said Seoul will be helped by the Presidential Committee for the G-20 Summit, which was established last December.

The diplomat also discussed the role of the G-20 setting as the premier forum for international economic collaboration, and what hosting the summit means for Korea.

The event should focus on “ensuring the sound financial recovery,” he offered.

“We certainly want to make sure we don’t have repetition of the sort of problems we’ve had in the last two years,” Uden said. “That really is where the G-20 has to focus.”

Uden added that the G-20 members must make sure they have “sound, sustainable and balanced growth going forward.” He also stressed the importance of ensuring that the financial sector is properly regulated and doesn’t get overextended, and added that reform of the World Bank and the International Monetary Fund should also be discussed among G-20 leaders.

The leaders summit is also expected to play a major role in further improving the Britain-Korea ties, Uden said.

With Prime Minister Gordon Brown having called an election, Britain may have a new leader by November. But regardless of who will be representing Britain, according to Uden, the trip will help relations.

“I’ve been very struck [by] how the relationship between President Lee and Gordon Brown has got much closer because of the G-20,” the ambassador said. “Actually, that’s going to happen with whatever government will be next. That’s still going to help the relationship .?.?. to come here and see what Korea is about these days.”

Uden also said the free trade deal between the European Union and Korea would serve as “a tremendous opportunity” for expanding business relationships not just between EU and the South, but also between London and Seoul.

“We particularly try to make sure this is a good opportunity for British business to see the potential of the Korean market,” Uden said. “So we last month in London launched a study of the FTA so that British business is prepared to see what the opportunities here are for their exports and partnership with Korean business.”

But in Uden’s mind, the most important occasion between the two countries in 2010 will be marking the 60th anniversary of the beginning of the Korean War this summer. He spoke of the return of British war veterans last weekend, when more than 80 veterans - more than usual, Uden said - arrived in Korea to begin their weeklong visit. They include Bill Speakman, holder of the Victoria Cross, and Derek Kinne, holder of the George Cross. The Victoria Cross is the highest military decoration in Britain and Commonwealth nations, and the George Cross the highest civil decoration those nations can bestow. Uden called them “military nobility.”

The veterans were scheduled to visit sites of their battles and also travel to the UN Memorial Cemetery in the southern city of Busan. According to the cemetery’s Web site, 885 British war dead are buried there.

Uden also said a member of the British royal family will visit Korea in late June and will visit Busan to unveil a new memorial for the British war casualties at the Busan cemetery.

The Korean War, which is sometimes referred to as the “Forgotten War,” remains etched in the hearts of many British people, Uden said.

“[The Korean War] does remain bedrock on which we build the relationship,” Uden continued. “We cared enough in those days and we were able to help you, and we came to your assistance. The message .?.?. of the Korean War is that [the] international community was prepared to come together to fight a threat to international peace and security.”

With the aid of Britain and other countries, South Korea bounced back from the wreckage of war. Uden said when veterans come here, often for the first time since the war, they can see that the country has successfully recovered and that their sacrifices were worthwhile.

“To come back and see the value of their sacrifice and the sacrifice of their comrades is tremendously therapeutic for them,” Uden said.

Korea has grown into one of the world’s top 15 economies. Uden said hosting the G-20 Summit as the first non-Group of Eight members to do so is apt recognition of where Korea stands today.

“It’s only appropriate that countries like Korea should take on this responsibility in the same way that the United States and the U.K. have taken on responsibility hosting so far,” Uden said. “G-20 is different than G-8. It’s designed to make sure that we have more important international players involved in developing economic architecture. I think it’s important both for Korea and also important in terms of showing that it is not just Europe, America and Japan, the traditionally large countries, that are responsible for other countries, too.”