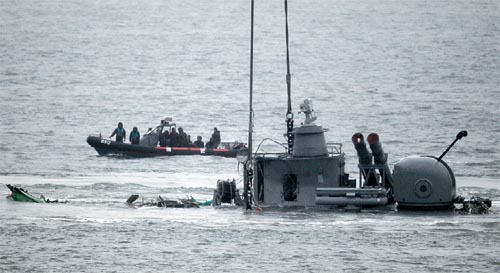 The stern of the sunken Navy corvette Cheonan breaks the surface while a sea crane lifts and moves it to shallow waters near Baengnyeong Island yesterday. The rear section of the vessel appeared above the waterline for the first time since it sank after an unexplained explosion on March 26. [YONHAP]


The military managed to hoist a part of the sunken Cheonan’s stern above the waterline yesterday, and discovered several pieces missing, which suggests a strong blast from the outside sunk the ship.

A section of the Cheonan’s stern was hoisted by a sea floating crane and moved to shallower waters near Baengnyeong Island, close to the western sea border in the Yellow Sea, 17 days after the unexplained sinking.

A defense official said that two of four ship-to-ship harpoon missiles installed in the stern appear to be missing. Also, a large stovepipe disappeared.

The official, who asked not to be named, said that the military presumed a strong blast from the outside destroyed some of the stern’s structure. Two cannons, 76 millimeters and 40 millimeters, were unharmed.

The military said yesterday it will move part of the 1,200-ton corvette closer to the shore as high winds and waves were complicating the salvage effort. Among 104 shipmates aboard the ship, 58 sailors were rescued on the night of the sinking, but 46 crewmen went missing. Later, two of them were found dead while 44 still remain missing.

Military divers have been battling strong currents in the Yellow Sea for more than a week.

The military managed to move the rear part of the ship at 6 p.m. yesterday, where many of the missing crew members are believed to be trapped, about 4.6 kilometers (2.8 miles) toward the coast of Baengnyeong Island to prepare for further bad weather, the Joint Chiefs of Staff in Seoul said.

“As the core structure of the hull sustained heavy damage, the entire stern can crumble if we pull it up now. The chain may rip it apart if it’s hoisted above the sea surface. We have to move the ship to the shallower seabed for a safer salvage operation,” said a civilian worker who is participating in the operation.

The ship sank about 1.8 kilometers southwest of Baengnyeong, which is the closest South Korean island to North Korea’s west coast, which is lined with short-range missile launchers and long-range artillery.

“Divers also plan to cover the ship’s surface with a net to keep intact what is inside,” Commodore Lee Gi-sik, chief of information operations at the Joint Chiefs of Staff, said in a media briefing.

The warship blew apart near the tense sea border with North Korea, the scene of three bloody naval skirmishes in previous years, spawning speculation of an attack by the communist nation. Both Seoul and Washington have been cautious about raising such a possibility, however, with President Lee Myung-bak instructing investigators to be “open to all potential causes.”

North Korea’s state media outlets have been silent on the incident.

Experts and officials have mentioned a torpedo as one of several possible causes, as well as floating sea mines, an internal explosion, “metal fatigue” and a collision with a reef.

Survivors say a powerful blast knocked over the ship and that they smelled gas, with the rear of the vessel disappearing out of sight less than a minute later.