Captain: Sailors put mates’ lives before their own

Captain: Sailors put mates’ lives before their own 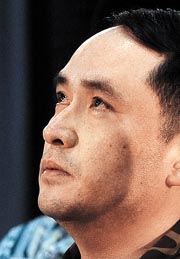 Weeks after the worst naval disaster in Korea’s history, and days after the families of the missing men called off the rescue attempt in order not to endanger other lives, Choi Won-il still believes that the sailors who had been under his command are still alive.

“They remain in my heart. I cannot forget them,” the Cheonan commander said in a heavy voice, his words sometimes breaking.

Choi, 42, had captained the Navy corvette for 20 months, and is currently undergoing treatment for post-traumatic stress disorder. But despite his pain, he said, “I will defend this country until the end.”

He spoke to the JoongAng Ilbo by phone on Sunday.

Q. After the explosion, how did you cope?

A. One sailor came up to me crying and said the stern of the ship had disappeared. Really, the rear portion was gone. I thought the priority was to rescue the men who couldn’t evacuate from the bow. The sailors were panicking and I was afraid they’d jump into the water, so I tried to calm them down. It was cold and the current was rough. I gave emergency treatment to the injured men. The lights were out, and some crew members turned on the emergency lantern. That light was life-saving. It helped us reduce the number of casualties. My men were well prepared. The sailors who weren’t injured tried to pull the soldiers trapped in front to safety. They rubbed them to keep their body heat up. Some of them were talking to unconscious men, to try to keep them awake. My men tried to save their fellows, not themselves. Their comradeship was so strong.

At a media briefing with the rescued sailors last Wednesday, you said the ship was hit by something right before the blast.

We were on routine patrol. Then a huge bang lifted me in the air. I lost consciousness for a while.

How did you feel when you left the ship?

How can I put that into words? I returned inland crying because I couldn’t rescue the other 46 sailors. Forty-six men are trapped in the rear portion of the vessel and I ... [Choi breaks down]. I felt my life was sinking as well.

How have you been since then?

I met with relatives of the missing men the day after the sinking, then I went straight back the scene. I told the divers about the possible locations where the men could be and the structure of the ship. Now I am pulling myself together.

I heard that your health is poor.

My heart still hurts. Doctors say it’s post-traumatic stress disorder. I want to go to the site where the ship is going to be pulled up, but the doctors advised me to take a rest.

You said in a media briefing that you will wait for reports from survivors.

I think [the missing sailors] are still alive. My hope hasn’t faded away. I can feel they are right beside me.

Before the sinking, did you talk with the two senior chief petty officers, Nam Ki-hoon and Kim Tae-seok, whose deaths have been confirmed?

They were great soldiers. They took good care of other crew members. Nam was an experienced sailor and had a lot of expertise in his mission. Kim operated gas turbines on ship and he’d had almost no accidents. They had passion. It just hurt me. I witnessed [diver Han Joo-ho’s] death at the site. My heart was filled with deep sadness. ... I wish the wreck would be lifted and the cause of the sinking confirmed as soon as possible. I also hope the Navy can recover its honor soon.

What is your plan?

I want to get to the scene as soon as I can. They are my men and the Cheonan is my ship. I will defend my country at all costs.