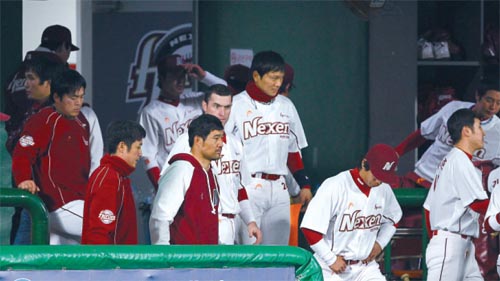 Nexen Heroes players leave the dugout looking dejected after losing to the SK Wyverns on Sunday night at Mokdong Stadium in western Seoul. By Kim Min-gyu

In “Jerry Maguire,” Cuba Gooding Jr.’s character had one rule: “Show me the money!”

According to some sources, the Nexen Heroes might want to think about that.

Despite earning a considerable amount of money in a new sponsorship deal and cash-saving offseason trades, the team has reportedly failed to pay its players in full. And that’s raising questions about the direction of the front office.

Overseas players Cliff Brumbaugh and Doug Clark are reportedly owed money. Signing bonuses to rookies and incentive bonuses for veterans allegedly have come late - when they have come at all. A manager says he is still owed half his contract fee. Even the team uniform supplier is having trouble getting paid.

So where has the money gone?

It’s perplexing. On paper, the team made plenty of money during the offseason, with 5.8 billion won ($5.1 million) reported from trades - and people in baseball circles say the Heroes likely made a lot more from the trades than was reported.

The Heroes also received 5 billion won in the sponsorship deal, and earned the average share of operational fees in the offseason.

But no one seems to know exactly where all that income went.

Brumbaugh may be willing to go to court to find out. According to one baseball official who asked to remain anonymous, “Brumbaugh is still owed $45,000 as part of his signing bonus and incentive clause. If he doesn’t get it, he’s not ruling out legal action.”

Brumbaugh is a KBO veteran and had played in the domestic league since 2003 except for a two-year stint in Nippon Professional Baseball from 2005-06. The outfielder was popular with the Heroes fans, but Nexen decided to part ways with him in order to bulk up its pitching rotation with overseas talent. He is now playing in Mexico.

Nexen said it’s a case of misunderstanding, not an unwillingness to pay. “We have paid the money owed from his contract and signing bonus. Under the contract signed between the player and the club, it is not possible for the team not to pay its players,” said one Nexen official. “We’re just having trouble coming to terms on the amount owed to the player from the incentive clause in his contract.”

But that doesn’t address the 100 million won manager Kim Si-jin is owed on his contract, or the late payments to rookies, veterans, and even team employees who have used their own money to cover players’ medical and other expenses.

“I told the front office to take care of the younger guys on the team first and that it was okay for me to receive my payment late,” said one veteran player who failed to receive his bonus.

Added a team employee, “It’s normal for us to be reimbursed with interest but we haven’t even gotten back what we spent.”