Kang Ik-joong makes an art of the moon

Kang Ik-joong makes an art of the moon 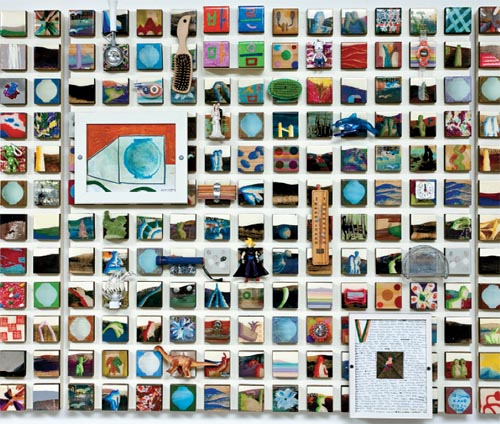 Even those who are not familiar with the name of Kang Ik-joong have probably seen one of his works if they live in Seoul. The big screen at Gwanghwamun, the main gate of Gyeongbok Palace in central Seoul, which is now under repair, is Kang’s work. The screen, called “Moon over Gwanghwamun,” was set up in December 2007 and consists of 2,611 wood panels, each of which is 60x60 centimeters (24x24 inches) and adorned with painted mountains or ceramic pieces, especially his beloved moon jars.

The Korean-born, New York-based artist is known for creating colorful large-scale mosaics made of small, mostly 3x3-inch pieces. His works decorate public spaces not only in Korea but also overseas, including the San Francisco International Airport and the Flushing-Main Street subway station in New York.

Kang is currently holding his first solo exhibition in Korea in 14 years at Gallery Hyundai in central Seoul through May 2. The large-scale exhibition features about 180 of the artist’s works, which are displayed in the gallery’s main building and spill over into its annex.

The works in the exhibition, whose Korean title means “stirred by the wind, joined by the earth,” share several thematic elements: love for nature, small pleasures and the wisdom gleaned from daily life.

His mixed media works on wood panels, which describe mountains and waterfalls, follow the aesthetics of traditional Korean landscape paintings, with images of nature depicted in simple colors and lines. 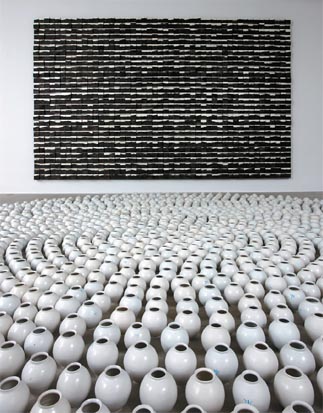 Kang Ik-joong’s installation “1,392 Moon Jars” (2010) is shown with his piece “Mountain” (2008), a mosaic of wood pieces that he painted with mixed media. Provided by Gallery Hyundai

In fact, the plump ceramic vessels, which originated in the Joseon Dynasty (1392-1910), that appear in Kang’s works are not white but a light sky blue. In some of his paintings, they even have tiny birds and other living things in them, just as the sky does.

“I love moon jars, because they are sunsu [a Korean adjective meaning pure or innocent] and dangdang [self-confident or naturally dignified],” Kang said. “I like everything and everyone that is sunsu and dangdang. And I also see these characteristics in the paintings of children.”

Kang has used children’s paintings to create a series of mosaics, all of which are called “Wall of Hope,” for hospitals. These works consist of several 3x3-inch paintings made by young patients and other children. The most recent works he completed were done in collaboration with children at the Chungnam National University Hospital in South Chungcheong and at the Asan Medical Center in southern Seoul.

A similar project Kang did was called the “Amazed World,” which he created by assembling 40,000 paintings by children from 150 countries. The work was installed in the lobby of the United Nations building in New York in 2001 and was displayed there until April 2002.

From his own works, he created the installations “Things I Know” and “Happy World,” both of which can be seen at Gallery Hyundai. Both works have humorous and playful overtones.

The Things I Know is made of 3x3-inch panels, on each of which is painted a Korean word. Together, the panels make a sentence and the entire work consists of many sentences strung together.

Some of the sentences are just funny, while others sound like remarks from wise philosophers: “Wearing glasses makes the face of a big-faced man like me smaller” and “The color of the sky directly before a storm is a pale blue-green.”

The interesting thing about the installation is that each panel can be viewed as an independent abstract painting, while groups of panels forming sentences constitute a completely different work.

“Assuming that small units will gather into a bigger work, Kang juxtaposes the canvases next to one another and creates a huge narrative structure,” Ki Hey-kyong, curator of the National Museum of Contemporary Art, wrote in the exhibition notes.

“His works are able to multiply themselves,” she continued. “This possibility of multiplication offers him chances to develop a huge range of variations, which can then be viewed in layers - one frame works as a single piece and multiple frames create one grand piece.”

The installation Happy World is another playful piece. To create it, Kang collected various objects, ranging from children’s toys to precious antiques, and attached them to small panels.

“Kang’s subjects are things from his ordinary life,” Ki wrote. “Just like a child, he is curious about his surroundings and absorbs what he sees.”