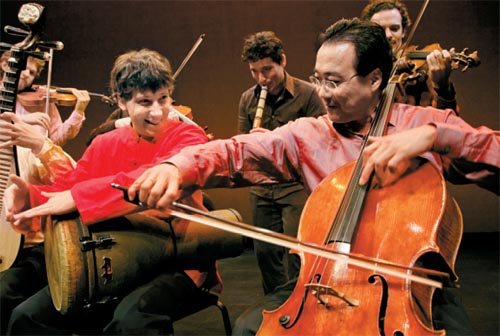 Yo-Yo Ma, right, performs with the Silk Road Ensemble on Sunday at the Seoul Arts Center in southern Seoul. Provided by the organizer

The celebrated cellist Yo-Yo Ma is known for his brilliant performances, but has become equally well known in recent years for his efforts to make music more accessible to the general public, using it to communicate across cultures throughout the world.

A good illustration of this work is the Silk Road Project, launched by Ma in 1998. As its name suggests, the project aims to connect artists and audiences along the historic trading route.

Ma will perform in Seoul this weekend with his Silk Road Ensemble as part of a seven-city Asia tour that is the last in a series of events commemorating the project’s 10th anniversary. The group is performing together for the first time in six years.

The Silk Road Ensemble, a rotating group of musicians, composers, visual and other artists from more than 20 countries around the world, debuted in 2002 with the album “The Silk Road: A Musical Caravan.” The group has since produced four additional albums and performed to critical acclaim throughout Europe, North America and Asia. The ensemble, for which Yo-Yo Ma serves as artistic director, is known for combining Eastern and Western musical instruments and styles in the creation of a sound that both preserves the cultures of the participating artists while simultaneously evolving into something new.

“Rather than a music ensemble of permanent members, the Silk Road Ensemble is a group of musicians and artists who study the relationship between tradition and innovation while performing together,” the event organizer said.