The hunt for the Korean Kindle killer

The hunt for the Korean Kindle killer

Many e-book readers use “e-ink” displays that consist of clear capsules full of tiny black and white balls that respond to an electric field, suspended in fluid.

A certain charge beneath a capsule causes the black or the white balls to move to the top of the capsule, making it appear either black or white. Combining the charges in different degrees can allow shades of gray to be displayed.

The key to an e-ink display: No backlight is necessary. For that reason, this variety of e-book reader can be used even in full sunlight, and may not cause fatigue as quickly. Power consumption is also one 100th of that of a liquid-crystal display, thus enabling readers to use the gadget for as long as a week on one charge.

E-readers equipped with LCDs, such as Apple’s iPad and some smartphones, on the other hand, require a large amount of power, and the content on the screen is less visible under bright light. The upside, of course, is that they are capable of more applications thanks to their higher quality, quicker refresh times and ability to display color.


The April 3 debut of Apple’s iPad tablet device was a smash, leading to initial sales of 700,000 units. Though there isn’t even a Korean release date yet, local importers estimate some 1,000 iPads have already been bought by consumers here. The iPad is being touted as a device for films, games, Web surfing, work on the go - and, of course, books. 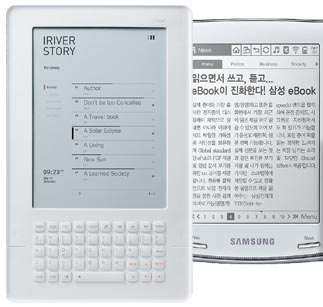 Apple’s new e-book reader app has been praised for its clear, easy-to-use interface. But local e-book reader manufacturers face a challenge Apple does not. In the United States, the Amazon Kindle transformed reading a book on a handheld device from a mere curiosity into an actual industry, but here in Korea, the market for readers is still in its infancy.

The front-runner is the iriver Story, which hit shelves in September 2009. The company made its name in the early 2000s with its sleek and stylish MP3 players. In 2002, the company was selling more MP3 players than any other company in the United States (though it would shortly be trounced by the Apple iPod).

The new upgraded version of the Story, released in November, comes with an English and Korean dictionary as well as an encyclopedia, and iriver CEO Lee Jae-wu said the company hopes to sell 400,000 readers worldwide in 2010. If the target is met, the company will account for more than 11 percent of the global e-reader market, a segment which is estimated by research firm DisplaySearch to be worth $851 million.

As of right now, the Story is the only Korean e-reader device actually on sale overseas, competing with products from Amazon and Sony.

In Germany, a major national bookstore chain, Hugendubel, sells the device along with the Web site of Weltbild, a major German publisher and media retailer based in Augsburg. It’s been available at Waterstone’s booksellers in Britain since December, and it’s also on sale in Russia.

Lee Sang-won, who is in charge of marketing at iriver, said, “We have received a positive reception in markets such as Europe, China and Southeast Asia since late last year. China, in particular, has great potential since the average reading volume of its population is five times that of Koreans.” 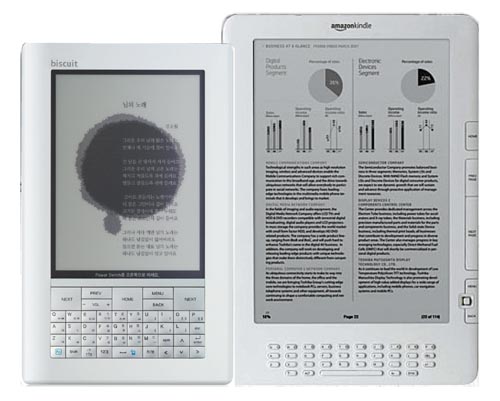 The company is also enthusiastic about the Story’s other functions. Baek Chang-heum, head of development, said, “Given that we are a relatively late starter, we tried to differentiate ourselves with the capacity to display all readable content currently available - from PDF files to e-Pub, TXT, PPT, DOC, XLS and even HWP [a format in wide use in Korea but not elsewhere] without the need for separate modifications.”

As befits an iriver, the device is also an MP3 player, enabling users to listen to music and audio books, and includes a QWERTY keyboard - features that are not available on the Kindle but common among other Korean e-book devices. Another unique feature is the Story’s comic book viewer.

Its one major drawback: It’s wired. Lacking both the always-online “Whispernet” of the Kindle and a simple Wi-Fi connection, Story users will have to plug it into a computer to download content.

But iriver isn’t the only one betting Koreans will come around to the idea of electronic books. Market mega-giant Samsung Electronics in February unveiled its 60K, the follow-up to the Papyrus SNE-50K, which debuted in July last year.

Taking advantage of its godlike status in Korea, Samsung has a near-unbeatable lineup of 65,000 pieces of content in its e-book store, thanks to a deal with top bookseller Kyobo, and more on the way by the end of this month from the Korea Electronic Publishing Hub, a company jointly established by other major online bookstores such as Yes24 and Aladdin.

Also in the works is an online periodical store called Textore, which will sell digital copies of six major daily newspapers including the JoongAng Ilbo (which is affiliated with the JoongAng Daily) and seven monthly and weekly magazines. 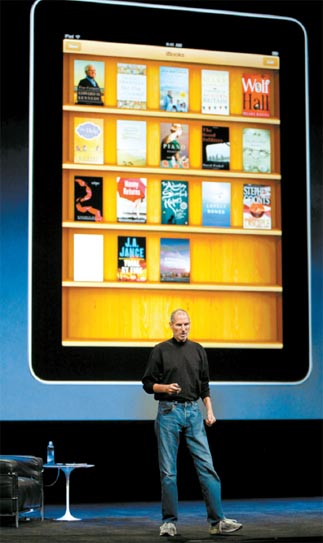 Steve Jobs, chief executive officer of Apple Inc., speaks about the iBooks application during the debut of the Apple iPad tablet at the Yerba Buena Center for the Arts in San Francisco, California, on Jan. 27. [Bloomberg]

It may be the largest collection of Korean material, but it’s still barely a dent in Amazon’s Kindle store, which contains over 600,000 e-books, newspapers and magazines. The Kindle and large-screen Kindle DX are both now available in Korea through Amazon.com.

The third domestic entrant to the e-book race is major online shopping site Interpark, which launched its Biscuit e-reader last month. Like the Kindle, it features a free cellular Internet connection, provided by LG Telecom, allowing users to shop for e-books anytime, anywhere. Already, the Biscuit shop claims to have 25,000 Korean books ready for download.

Prices for e-books range from half to slightly more than paper copies. “Eugyo,” the latest novel by Park Bum-shin, sells for 7,200 won ($6.46) in electronic form, while the physical version costs 12,000 won.

According to Yoon Hyo-jin, an analyst with Woori Investment Securities, Korea’s e-book market was valued at 132.3 billion won as of January this year, accounting for a mere 5 percent of the domestic publishing industry. However, she said in her report, “There is a high chance that the success of e-books in the United States will soon spill over to Korea.”

As of September last year, the Kindle commanded about 45 percent of the U.S. digital book market, according to market researcher iSuppli, while Sony had 30 percent. The remaining 25 percent was spread among the more minor gadgets.

But the iPad promises a tough challenge to the Kindle’s dominance, and the two companies are battling to extract more favorable terms from large bookstores. Unveiling the iPad on Jan. 27 in San Francisco, Apple CEO Steve Jobs pointed to its e-reader functions as a prime selling point, saying the company had struck deals with leading publishers such as Penguin, Simon & Schuster, HarperCollins, Hachette Book Group and Macmillan to provide content through Apple’s new iBooks online store.

Following Jobs’ announcement, Macmillan issued a demand to Amazon that it raise Kindle prices for its books to $15 from the online retailer’s preferred price of $9.99. In response, at first Amazon pulled Macmillan books from its store, but mere days later they were back, ranging in price from $12.99 to $14.99.

Since the Kindle first launched, Amazon has sold books under wholesale arrangements, setting their own prices. But after Macmillan broke ranks, on March 31, publishers HarperCollins and Simon & Schuster signed new contracts with Amazon allowing them to set their own books prices, too.

Where the U.S. market is already developed enough to provoke battles like these, Korean e-book shelves are still rather bare, with current best sellers and classic Korean novels few and far between in all three of the major e-book stores, run by Kyobo, Interpark and Aladdin.

One e-book industry insider boiled the problem down, saying, “Providing a large database of readable content is much more important than inventing a cutting-edge gadget.”