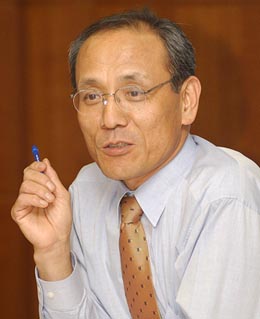 Han Yong-oe Founder of In Clover

Han Yong-oe, executive adviser of Samsung Life Insurance, recently made a huge decision about his personal life after retiring from the competitive corporate world.

Han donated 1 billion won ($890,000) from his personal funds to set up the In Clover foundation, a social welfare group dedicated to helping children from multicultural families in Korea.

Instead of devoting his retirement years to enjoying life, Han believes that he must give back to society for what he received during his career at Samsung, including being president of consumer electronics goods at Samsung Electronics and the head of the Samsung Foundation and Samsung Corporate Citizenship, the group’s social welfare unit.

Han told the JoongAng Daily that multicultural families are an inevitable change that is taking place in formerly racially homogenous Korea. However, Korea is unprepared for the change and could face tremendous problems resulting from racial discrimination.

Q. How did you start a welfare foundation?

A. Looking back, I have done all that I needed to do in my field by working for Samsung for 35 years. When you get old you have tasted the sweetness and bitterness that life offers. Then you start wondering what I can do next that would be fruitful and make me happy. I have worked for the Samsung social welfare business for 13 years and therefore I knew a lot of people in the art and social welfare business. Hence setting up a social welfare foundation came as something that was natural to me. I had the ability and knowledge to help others. Until now I lived on the benefits Samsung had offered to me and I decided it was now my turn to help others.

But I didn’t want my help to be on the level of volunteer work. I wanted to provide something much bigger. One billion won may seem like a huge amount but when you compare it with corporate contributions made every year this is relatively small. But even that small amount makes me feel worthwhile just by the thought of helping others.

How would you describe welfare?

The purpose of welfare in a grander framework is to help people find happiness and create stability in their lives. Welfare should be about helping people to make the most of their abilities that would contribute to society in the end. In a micro sense, welfare is about helping people such as providing nutritious foods to those who are starving or donating wheelchairs to those who need the ability to move. But today the welfare concept has expanded further. Now it also includes helping people get out of addiction and other mental illnesses.

Were you ever helped by others when you were growing up?

When I was growing up I received a lot of help. Back then, volunteer and social institutions were almost nonexistent. Although I got through schools thanks to scholarship, in my early years my relatives paid for my education costs. Today elementary is mandatory and therefore school is free but back in my time we had to pay to go to school. My father passed away early and my relatives had to pay for my tuition until I was old enough to get scholarships. Basically, early in my life I received help. I didn’t think about returning the help that I received until I started working in social volunteer work. Early in my career, the concept of social welfare wasn’t as well established as it is today. Times were hard and we were busy getting out of poverty. But when helping others one thing people should keep in mind is to help others not with a sense of superiority. It is better not to get help from such people.

Why are you focused on helping multiracial families?

Korea needs to focus support on multicultural families as it will soon become a national social issue in 10 or 20 years. Although the U.S. has a shorter history than ours, it has a longer history when it comes to the mixing of races. But still even that country has not fully solved the problem of people from different backgrounds living together and the resulting racial conflicts.

It took 240 years since independence for the U.S. to elect a black president. Korea is a homogeneous country. But things have been changing since foreign workers have been entering the country, particularly in the last 10 years. Racial tension in Korea is only in its early stages and it will get worse as children from multicultural families grow up and become full members of our society.

The U.S. after two centuries is still struggling with the issue but we have not started dealing with this issue in the past 100 years. One can’t even imagine how to solve this situation since we never thought outside our homogeneous point of view.

There are already a few racial discrimination problems surfacing at elementary schools where the children of multicultural families are attending. The problem at that level can be easily solved. However, once these children grow up racial tensions could lead to organized crime and violence.

How did you come up with the name of “In Clover” and what does it mean?

What would you like to tell young people today?

I follow four beliefs as my guide in life. Never lie. Do my best. Have faith. Be brave. I have tried to live by these beliefs and I strongly believe it applies also to the youth today. I always advise young employees that it’s better to work well than work hard.

For example, if you’re a smart worker who uses his time most efficiently, you would have collected important data that would make you prepared for any kind of project that falls your way. On the other hand, let’s take the case of a worker who didn’t prepare earlier receiving the same project. Of course, this employee would work hard finding data while burning the midnight oil at the office.

This employee might get the work done but because he stayed late at night at the office he is too tired to work effectively on the second day. This is the type of person who works hard but not too well. The employee has no one to blame but himself for his lack of ability to use time well. Those who work well are usually well prepared.