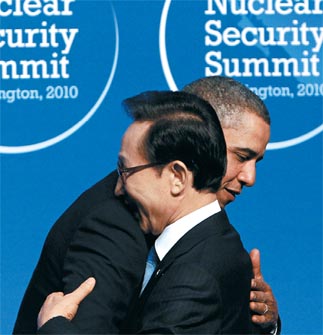 South Korea will host the second Global Summit on Nuclear Security in 2012, in recognition of its efforts to fight a nuclear threat and promote peaceful use of atomic energy.

The meeting, aimed at finding ways to keep weapons-grade nuclear material out of the hands of terrorists, is the biggest summit hosted by the United States since 1945. Obama has called nuclear terrorism the single biggest threat to global security, urging the international community to come together to prevent it.

“President Obama asked President Lee about Korea’s intention to host the next round when the two leaders had a telephone conversation on April 1,” said a senior Blue House official. “Lee responded positively to Obama’s proposal.”

According to the source, Obama told Lee that the nuclear summit has great significance and potential, and that he wanted to make it a regular event held every two years. Obama then asked if Korea wanted to host the 2012 meeting, and Lee said it would, the source said.

“The inaugural nuclear security summit was attended by leaders of 47 nations, and the second meeting is expected to be attended by more than 50 countries,” said the source. “It will be the largest international summit hosted by Korea.”

Another senior presidential aide emphasized the symbolic significance of South Korea’s hosting of the event. “South Korea is directly involved in North Korea’s nuclear crisis,” said the official. “The idea of a nuclear-free Korean Peninsula can serve as a starting point of a nuclear-free Earth.”

The official also said South Korea’s hosting was decided by taking into account the peculiar situation on the Korean Peninsula, where the South has been promoting the peaceful use of nuclear energy while the North has operated nuclear arms programs.

“The year 2012 is an important year, because presidential elections will take place in the United States and Russia, and China will choose a new leader. North Korea has declared a goal to build a strong, great country by that year,” the official said.

“In terms of international politics and security affairs, it is crucial timing. President Lee’s agreeing to host the second round of the nuclear summit was based on such considerations.”

The Washington summit has a goal of securing loose nuclear material around the world within four years. A joint communique and an action plan are expected to be issued at the end of the meetings. The participating leaders are expected to state their commitments to effectively safeguard nuclear materials and facilities in their countries and minimize the use of highly enriched uranium in the communique.

President Lee began his schedule at the nuclear summit by attending a dinner hosted by Obama on Monday night, Washington time. During the first session of the summit on Tuesday, Lee was to emphasize South Korea’s advanced use of nuclear energy for peaceful purposes. Korea currently operates 20 nuclear reactors and 19 more will be built by 2030, and the country has not had an accident in 32 years of operating nuclear power plants.

“About half of the nations participating in the nuclear security summit have no nuclear power plants, and many of them have only one or two reactors,” said a Blue House official. “President Lee is engaged in nuclear reactor sales diplomacy.”

In December, South Korea won a $40 billion deal to build four nuclear power plants in the United Arab Emirates. Ahead of the summit on Monday night, Lee met with Mohammed bin Zayed Al Nahyan, the crown prince of Abu Dhabi.