Ambassador has a special message for high school

Ambassador has a special message for high school 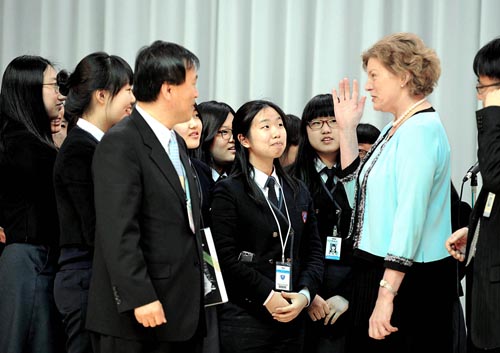 Kathleen Stephens, the U.S. Ambassador to Korea, gave a special lecture at Seolwol Girls’ High School in Gwangju yesterday - after a special request by one of the students.

In her speech to the students, Stephens stressed the importance of education and empowering women in society.

“Investing in women who have high potential is one of the definite ways to achieve social development,” Stephens said. “I’m impressed at what Korean women have achieved so far in higher education compared to the time when I first came to Korea, back in the 1970s.

“Even if you don’t graduate from prestigious universities, you can still be successful in arts, sports, and in business by using your creativity and talent.”

More than 840 freshmen and juniors attended the meeting in the school’s auditorium, which lasted over an hour. Stephens, who taught English in Korea as a Peace Corps volunteer, gave her lecture in fluent Korean and answered students’ questions in English.

Stephens told the students that when U.S. President Barack Obama visited the Blue House last year, he praised the Korean education system and said there is much that America can learn from Korea.

Stephens had visited the school at the request of senior Bae Ji-seong, 18, the leader of the Seolwol’s English Loving Friends current-affairs club. Bae had written to the U.S. Embassy last September asking for an interview with the American ambassador.

“ELF polled the juniors asking them to name a female leader or celebrity they wanted to meet, and Ambassador Stephens ranked in the top place,” Bae said.

“Because there was no guarantee that the extremely busy ambassador would travel to Gwangju to meet us, I didn’t tell my friends and secretly sent a letter with school’s English paper, saying that we wanted to meet her and could she give some wisdom of words to inspire young students.”

Bae didn’t hear from embassy officials for three months. In January, she was notified that the embassy had positively reviewed her letter. Officials met Bae in person at her school last month, and told her the ambassador would pay a visit.

“I didn’t know that sending a letter to the ambassador was a big deal. People told me it was highly unlikely that I’d hear back from the embassy because she probably gets lots of letters,” Bae said.

“She knows very well about Korean culture and sentiment, as she has a background here, and she’s a role model to us who want to work in international organizations in the future,” she continued.

“Something that seemed impossible actually turned into a reality. I and all the other students here are proud that we can attain a goal if we don’t give up and keep challenging.”