Sadder but wiser, Bong returns to the KBO

Sadder but wiser, Bong returns to the KBO 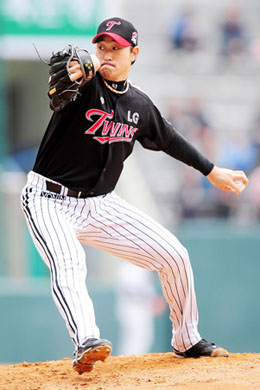 A chastened Bong Jung-keun says he’ll be a team player once he returns to the Korea Baseball Organization after a week’s punishment tour in the minor leagues.

“I apologize for disrupting the team’s chemistry,” Bong said Tuesday as he threw warm-up pitches at Jamsil Stadium in southern Seoul. “I will live up to my responsibilities and make up for my struggles.”

The 30-year-old pitcher for the LG Twins was sent down for griping and failing to live up to his role as the team’s ace. After losing two games at the start of the season, giving up three runs in each, he publicly disagreed with the team’s coaching staff during a game.

Adding fuel to the fire, Bong’s wife posted a message on her Web page accusing manager Park Jong-hoon of letting lose a profanity-filled tirade against her husband. The resulting bad publicity brought heavy fan criticism of the both players and management, and, management said, disrupted team morale.

Bong was sent down to the team’s minor-league affiliate on April 5. The move was intended as a wake-up call, and the former Major League and national team pitcher said the time for self-reflection brought his ego in check and gave him a new appreciation of his teammates and the fans.

The usually upbeat Bong didn’t smile as he told the press, “I was warned about my actions during a game in the past.

It was clearly wrong of me to express my discontent at the coaching staff during a game. I put myself ahead of my teammates.

“I think it’s more important to put the team ahead of myself than to just play well. My manager [Park] changed me and made me a tougher person. And many of the vets on the team gave me a lot of advice and help.”

Bong went on to state it is now important for him to provide solid outings for his team once he makes his return to the KBO. The southpaw said his goal is to become a workhorse for the Twins.

“I want to become an inning-eater,” said Bong. “It’s still early in the season. I can make 25 starts.”

Bong said his arm feels fine and he’s ready to throw at full strength. He said he was ready to start as early as tonight, but Park said he hasn’t decided when to return him to the lineup.

“I have to evaluate the starting rotation,” Park said Tuesday. “Depending on Shim Soo-chang’s physical condition, Bong can make his return either on April 15 or 16.”