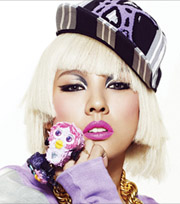 Popular Korean female singer Lee Hyo-ri may have made a comeback with her fourth album, “H. Logic,” but she’s already facing criticism for the music video for the title song, “Chitty Chitty Bang Bang.” Some say that Lee copied Lady Gaga, a top female singer in the United States, by using the image of a glamorous, strong female warrior in her video, just as Lady Gaga does. In the music video, Lee’s fashion, makeup and hairstyle also resemble that of the American singer.

Lee denies that she copied anyone else. “If a person really knew Lady Gaga, I doubt that person would say my style is like hers. GaGa is something special,” she told to a local news agency earlier this week.

Lee is no stranger to criticism, having faced allegations of plagiarism in 2006, and says she remains firm in her desire to try as many different things as possible.