Fingers, too, can be windows to the soul

Fingers, too, can be windows to the soul

“A Train of Stories,” a large work sculpted by Kim Jeong-wan, a fifth grader at the Hanbit School for the Blind, is among the artwork on display. Provided by Another Way of Seeing

It was a far cry from the typical gallery’s forboding “Do not touch the artwork.” Those signs don’t usually come in braille, either.

The event is called “Things We Can Do, Things We Can See and Places We Can Go,” and the exhibits aren’t supposed to be experienced with the eye. Created by students at the Hanbit School for the Blind in 2008 and 2009, these sculptures are meant to be touched.

In Hwa-dong, Jongno District, the Korean Art Association for the Blind runs the venue, which they call Another Way of Seeing. Usually it hosts events to help blind people gain an appreciation for art, which can be a difficult task, but the current exhibition, which runs until April 20, is meant for the public, seeing or not.

It’s a world none of the visitors in my group knew existed. As she guides us between the clay pieces, which appear to the eye like exotic, curvaceous coral, Yang Young-hee, head of the venue’s planning department, is barraged with questions. “Are there any art classes in school for the blind?” “Do the blind children draw pictures?” “Are there any blind professional artists?”

To respond to questions like these, Yang tells an anecdote about a boy who was visually impaired and grew depressed. But he soon discovered art, and it transformed him into a different person, Yang said. “The art courses that I took during my years at the school for the blind brought me dignity,” he said, according to Yang, and even today he maintains his passion for the arts while working as a practitioner of acupuncture and traditional Chinese medicine.

“Visual impairment in children varies. Some are visually impaired from birth, some become blind in accidents and some begin to lose their sight due to disease. Artistic creation is a product of five senses, and the eyes are just one of the senses. Although blind people cannot see anything, their desire to express themselves visually may be even stronger than others’, and they can do creative work using their own senses,” Yang explained.

Park Ji-yun’s “Violin” is one example. “During the last first semester, Ji-yun couldn’t even pack the clay firmly, as her fingers were too weak to do it. People usually think that there are many talented children in music, but not in art. But children who have an unusual sensitivity to sound begin to combine music with art. Look at the shape of the violin, and you can hear the music.”

The association is finding help in strange places. Also visiting the gallery was Lee Seon-hui, head of the Korean unit of Nvidia, a U.S.-based manufacturer of computer graphics hardware. Though not involved with the pieces at the current exhibit, Nvidia Korea sent 16 volunteers to teach art classes at the Seoul School for the Blind as part of the “Touch Visual” program last December and to the Hanbit School last month, where they will teach in the spring and fall.

“We make our money from visuals. It was so good to provide a different way for visually impaired students to experience vision. Although we only pay their transportation expenses, 450 people applied to teach in the first term. Most of them are college students in art-related majors, and they are full of drive to create works with blind people.” 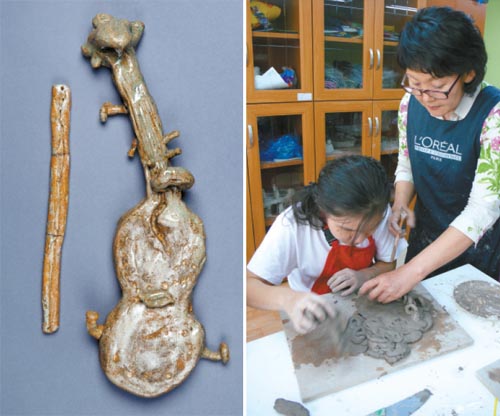 Left: “Violin” was created by Park Ji-yun, a fourth grader at the Hanbit School for the Blind. Right: A visually impaired student at the school works with clay alongside a teacher. Provided by Another Way of Seeing

The Touch Visual Web site (http://cafe.naver.com/touchvisual.cafe) includes pictures of their activities, and a torrent of comments has already been posted even though it’s only been a month since the art class began.

“Our headquarters in the United States were so impressed by this work by the Korean branch,” Lee said. “There are many companies that contribute to the society where they’re based, but it’s rare for something to match the company’s business.”

Yang at the gallery said, “People who are contributing to Another Way of Seeing say that their eyes have been opened in a new way.”

The venue even has a supporters’ association, called Sandwich, which got its name because the members first dropped in at Another Way of Seeing by chance after eating sandwiches at a cafe near the gallery. The group holds a fund-raiser once a year to support educational activities for the visually impaired.

For Children’s Day, May 5, the gallery plans to hold a “Neighbors Gallery” party.