Homeschooled kids get best of both worlds

Homeschooled kids get best of both worlds 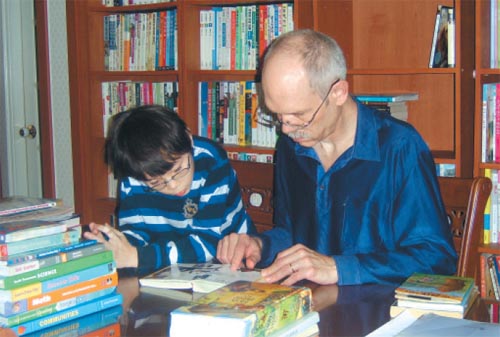 En-uk Hwang takes homeschool classes with his father, Jeffery Hodges, in the evenings after he finishes public school for the day. Hwang will begin homeschooling full time when he reaches the seventh grade. Photos by Christopher Carpenter


Sa-rah Hwang, 13, attends what some would call the ideal middle school. Her parents are involved, she doesn’t have negative peer pressure and she’s close to home.

In September 2009, Hwang left Korean public school halfway through the seventh grade and became one of about 600 to 1,000 kids in South Korea who are homeschooled.

That wide range is the best guess of the Home School Legal Defense Association, a U.S.-based nonprofit. In fact, it’s difficult to say how many families homeschool in Korea since, for Koreans, it falls into a legal gray area - prohibited by law, but not punished by the authorities.

For non-Koreans living here, though, it’s legal. Lee Gyeong-rim, who works in the global human resources division at the Ministry of Education, Science and Technology, said Korea does not have laws dictating how foreign families educate their children. The only possible drawback for foreign children who homeschool may be difficulty entering Korean universities, Lee said.

For Hwang, whose father is American and mother is Korean, that won’t be a problem. One of the reasons she homeschools is because she plans to go to an American college.

“If I wanted to go to an American university, I had to work harder on my English,” she said.

She begins most school days between 8:30 and 9 a.m. and tackles one subject per day, finishing at about 2 p.m. Monday is English, Tuesday is math, Wednesday is science and so on. Hwang gets her assignments online, does homework and turns it in to teachers at Keystone School, a U.S. accredited online school whose graduates earn a U.S. high school diploma.

The contrast between Korean and American learning styles was another factor in the decision.

“I didn’t want my children to be punished for giving the wrong answer,” Hwang’s father, Jeffery Hodges, said. “Because to get to the right answer or to be creative you have to make a lot of mistakes, and you learn from your mistakes.”

While Hwang and her family are relative newcomers to homeschooling, Rhonda Nicholes has 10 years of experience. The mother of four began in 2000 when her oldest son Benjamin was ready to begin first grade. He had been in a Korean preschool, but Nicholes incorrectly believed foreign children couldn’t go to Korean public school.

While she couldn’t afford the tuition at the nearby international school, Nicholes was once a certified high school teacher in the United States, so one option was to teach at the school so her son could go for free.

Yet Nicholes worried that such a move would put a strain on the family, since her husband worked all day in Korean churches. Nicholes and her husband, Steve, are missionaries with Word of Life Fellowship, Inc., a Christian youth organization.

She also had two toddlers at home. So she decided to homeschool.

Like Hwang, Nicholes uses a curriculum with daily assignments for an entire school year. Sonlight, the curriculum company Nicholes chose, started as a way for Christians living overseas to educate their children.

“It really minimizes the amount of planning that I have to do as a homeschool mom, and that is just worth its weight in gold to me,” Nicholes said. “So when we’re not doing school, I really am free.”

While children who go through Sonlight do not get a high school diploma, Nicholes keeps a portfolio for each child showing examples of their work, standardized test scores, and, for her son who is now in high school, a transcript. In Benjamin’s case, it will be what he shows to admissions officers when he applies for college. He also plans to take the SAT and ACT.

For her younger children, Nicholes has not ruled out the possibility that they might later enroll in public schools in the United States. If they do, she wants to be able to show school officials their work so they can be placed in the appropriate grades.

Nicholes suggests that American homeschool families become familiar with education laws in the state where they will be based if they move back. Meeting a state’s education requirements in terms of material covered and testing makes the transition to public school easier.

Other advice for would-be homeschoolers is to tap into Korean public libraries, which often have children’s books in English, and to study the Korean language or Chinese characters.

Nicholes’ older two children use the Web site www.koreanclass101.com, which was started by Korean-Americans. “It’s a very modern radio show format that involves listening, speaking [and] reading,” she said. “Very good and not expensive.”

Additional resources for international homeschoolers are available at http://homeschooling.gomilpitas.com.

While both Hwang and the Nicholes family are long-term residents of Korea, some homeschool families are here for shorter stays.

Jenny Walters came to Korea with her husband and three daughters about a year and a half ago, after living in Japan. Her husband is a civilian working for the U.S. military, so her children were eligible to enroll in the Seoul American Elementary School on the Yongsan U.S. Army base.

Last year, Walters, a former certified teacher, began to worry that the frequent moves her family was making were affecting her second daughter, educationally and emotionally.

“I’m not working,” Walters said. “I felt like there’s no reason why I can’t step in and try to fill in some of the gaps and connect some of the dots.”

After a few months, the 7-year-old was reading at a third grade level, a year ahead of other kids her age.

Walters, who moderates the SeoulHomeschool group at Yahoo! Groups and is president of the Yongsan Home School club, said homeschooling is well suited for gifted children, those with special needs or children who just don’t fit in at traditional schools.

Homeschoolers also learn in greater depth, she said. “We just started talking about fireflies at my house a couple of weeks ago and the question came up, ‘Can fireflies turn their light on by themselves? Is it automatic or can they choose to do it when they want to?’” Walters said. “So that one question for us sparked an entire study about fireflies.”

While Walters uses materials from her time as a teacher, she said full curriculums help families without education backgrounds make sure they don’t miss anything.

“It’s a big worry when you are your own child’s teacher,” she said, “because the full responsibility falls on you.”