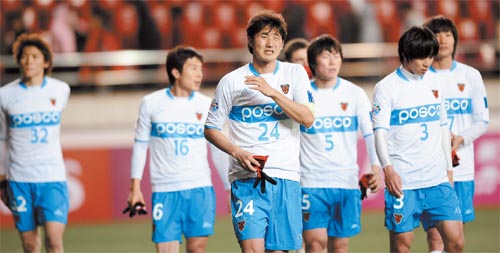 South Korea’s Steelers fought it out to a goalless draw with Australia’s Adelaide for a total of 10 points each, leaving Sanfrecce Hiroshima of Japan and Shandong Luneng of China out of the running in Group H. Japan’s Gamba scored a decider in injury time for a 2-1 win over the Suwon Bluewings of South Korea, which booked its place in the round of 16 two weeks ago.

Osaka now has 11 points and Suwon 10 in Group G. They join South Korea’s Seongnam Ilhwa, Jeonbuk Motors, and J-League champions Kashima Antlers in the round of 16 May 11-12.

Both Osaka and Suwon were quick on the counterattack, with good work from Chinese defender Li Weifeng and Brazilian striker Jose Mota bringing the Korean side close in the first half.

The Koreans opened the scoring in the 58th minute when Mota nodded home from a corner.

“Our hurdle was to reach the next round today.

“My guys played a tough game. They never gave up until the end, they wanted to win three points and they made it. I’m happy about it,” said Osaka coach Akira Nishino.

In the other early games, Lee Tadanari scored a brace to give Hiroshima a 3-2 win over Shandong, while Erwan Gunawan’s strike gave Singapore Armed Forces its first win as it beat Henan Jianye of China 2-1 in Group G.

In Group D, Al Hilal won its berth in the next stage after drawing 0-0 at home to second-placed Al Sadd of Qatar, with the added bonus of being assured of topping the group and with it home advantage in the last 16.

Al Sadd remains the favorite to take the second qualifying spot as it hosts bottom side Al Ahli of the United Arab Emirates in the final group match on April 27.

Al Ahli had earlier recorded its first win of the campaign with a 2-1 victory at home over Iranians Mes Kerman that left Al Hilal with a place in the next round and Mes Kerman a point adrift of Al Sadd in third place.

In Group C, bottom-placed Al Ain of the UAE saw its hopes of reaching the next stage disappear as a hat trick by midfielder Odil Ahmedov gave Uzbek side Pakhtakor a 3-2 victory.

The victory put Pakhtakor at the top of the table after previous pool leaders Al Shabab lost 1-0 away at Iranian side Sepahan and thereby missed out on booking its place in the next round before the final round of group matches.

Al Shabab risk missing out altogether. The team is now third, a point behind Sepahan, who travel to Al Ain in the final group game.

Al Shabab host Pakhtakor, who need a point to reach the second phase.