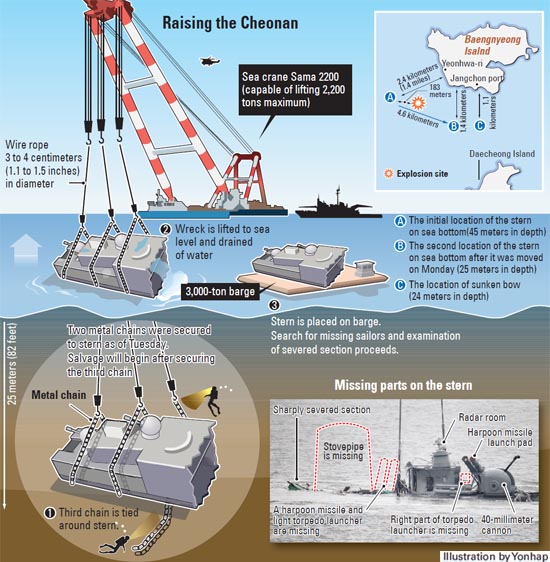 The sunken stern of the Cheonan is supposed to be removed from the sea today, nearly three weeks after the 1,200-ton corvette mysteriously went down off the west coast.

The Ministry of National Defense announced yesterday the operation to retrieve the rear part of the Cheonan was scheduled to get under way at 9 a.m. today. On Monday, the stern broke the water’s surface for the first time before it was moved to shallower waters to facilitate the salvage operation.

Park Sung-woo, spokesman for the Joint Chiefs of Staff, said divers would connect a third chain around the stern to lift it with a crane. The military had said it would need three chains to retrieve the stern and four chains to salvage the bow. Poor weather conditions Monday, with strong winds and high waves, put salvage operations on hold and prevented barges and cranes from reaching the waters where the Cheonan lay.

Navy Cmdr. Song Moo-jin of the Ship Salvage Unit estimated that the stern would weigh about 955 tons, including water filling the ship. 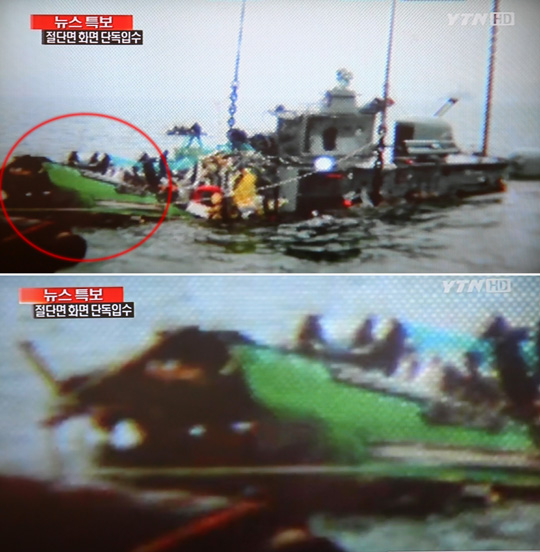 “The actual weight of the stern is estimated at 625 tons, and our calculation on the amount of water and oil inside is 330 tons,” Song said. “Based on the U.S. navy field manual on salvage operations, the safe working load for one crane chain is 400 tons. Trying to lift 955 tons with two chains, as some media have suggested we should, would be extremely dangerous.”

According to the ministry’s estimate, retrieving the stern would require up to 11 hours. The process will include draining water from that piece, placing it on a barge and searching for the bodies of missing men.

Of 104 sailors aboard at the time of the sinking, 58 were rescued and 44 are still missing, while two were found dead. Survivors have said a strong explosion split the vessel in two and the rear of the ship disappeared from sight in about a minute, but they didn’t smell any gunpowder.

After studying photos and TV coverage showing the broken exterior of the stern after it was raised above the waterline on Monday, some military officials concluded that an outside explosion was the likely cause.

“Either there was some impact underneath the ship, or some material entered into the ship and exploded there,” one high-ranking military official said. “Looking at the shape of the flooring, I don’t think an internal explosion would be the cause. Also, it couldn’t have been due to some impact from the side.”

North Korean involvement, through a torpedo attack or sea mine, has been suspected from the start. Other theories include an internal explosion or a ship malfunction as a possible cause.

“I believe it’s inappropriate for us to presume a North Korean attack when the cause hasn’t been determined yet,” Kim said. “But we are developing plans to deal with every possibility. We’re considering military and nonmilitary measures.”

Later, Kim explained he had only meant the military was preparing to support any government decision.

When asked if he meant the action would include military measures, he said, “I would like to withdraw what I’d said earlier.”

Representative Yoo Seong-min of the Grand National Party argued that if North Korea is behind the explosion that took down the Cheonan, then one of the options for the Defense Ministry must be of a military nature.

Kim Tae-young agreed and said, “I think it’s the obligation and responsibility for our ministry [to consider military action].”