Marine park visitors up in wake of Cheonan

Marine park visitors up in wake of Cheonan 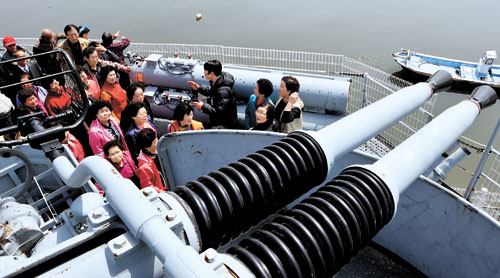 Tourists listen to a guide aboard a destroyer at the Sapgyoho Marine Park on Friday. By Kim Seong-tae

The tragedy of the Cheonan has given rise to a renewed appreciation of the importance of national security. And to try to understand it, and get some grasp of the scope of the disaster, some people are turning to a marine park.

“After looking around at the model ships, I was able to understand the Cheonan’s sinking a little bit more,” said Byun Chung-gu, 71, of Seongnam, Gyeonggi, as he toured the Sapgyoho Marine Park in Dangjin County, South Chungcheong.

Inside the park, a retired 4,000-ton landing ship and a 3,500-ton destroyer on loan from the Navy are on display.

On Friday, some 300 tourists from all over the country passed by. Kim Yeon-sik, 47, an executive who administers the park, said the number of visitors has increased 20 percent on weekdays and 30 percent on weekends since the Cheonan sank on the night of March 26.

The 1,200-ton patrol combat ship sank after an unidentified explosion broke it in two near Baengnyeong Island on the western maritime border with North Korea in the Yellow Sea.

“I’ve seen people showing more sadness about the sinking after touring the park,” said Yu Young-jun, head of the park.

Byun said, “I wish this incident would make all Koreans work to improve their understanding of security.”

The marine park offers a route to understanding. There are eight exhibit halls covering 1,200 square meters (12,916 square feet) inside the landing ship. In each hall, the history of the Korean Navy and Marine Corps - battleships and cannons, Adm. Yi Sun-sin’s naval victory against the Japanese in the Imjin War (1592-1598) and the Incheon Landing Operation in September 1950 - is introduced in 3-D images and wax figures.

Visitors can also find maps, charts and a board that explains the inter-Korean naval skirmishes of 1999 and 2002. Those two clashes also occurred on the western maritime border in the Yellow Sea.

Some tourists were moved to tears by the brief explanations about the naval clashes - and what happened when the Cheonan went down.

“It’s heartbreaking to hear the story of young sailors who sacrificed themselves to defend this country at all costs,” said Shin Jeong-ja, a visitor from Yeongi, South Chungcheong.

One visitor asked the difference between a destroyer and a corvette. Another tourist asked where the missing sailors are believed to be trapped in the wreck, and what caused its sinking.

“The model destroyer you are aboard is bigger than the corvette Cheonan, but the structure of the two are almost the same,” Jeon said. “But I don’t think I am responsible for saying the cause of the sinking and missing sailors’ whereabouts.”

The South Chungcheong government, Dangjin County and a private firm jointly invested 4.1 billion won ($3.6 million) to run the park as a corporation.

The model landing ship and destroyer were built in the United States in 1945 and 1944, respectively. Both vessels were retired in 1999.

The landing ship is 100 meters long and can carry 15 amphibious vehicles, 15 trucks and 500 soldiers.

The destroyer is a 120-meter battleship armed with cannons, including a five-inch cannon, missiles and torpedoes.