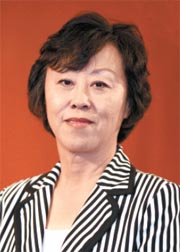 For years, Korea has had several women’s professional leagues but no female head coach. That was until yesterday, when Cho Hae-jung, 57, became the first woman to be hired as a head coach in Korean professional sports. The 1976 Montreal Olympics bronze medalist inked a three-year deal with GS Caltex of the Korea Volleyball Federation’s five-team women’s league.

GS Caltex had been looking to hire a new head coach after Lee Sung-hee stepped down from the position at the end of the playoffs.

“I decided to accept the head coaching position with the GS Caltex because it’s a good team and the players possess the type of style to my liking. I think the players will adapt well to my coaching style,” said Cho in a telephone interview.

As the first female head coach in Korean professional sports, Cho is already receiving a lot of attention and she’s keen to pave the way for other female coaches and players to follow her lead into the head coaching world.

“Many have congratulated me but to be honest with you, I didn’t get much sleep during the past week,” said Cho.

“The position of being the first female head coach in Korean professional sports comes with a lot of responsibility. There’s pressure. I have to set a good example for others.”

Cho takes over a team that went 16 wins and 12 losses during the regular season for a third-place finish. GS Caltex set the single-season record of 14 consecutive wins but lost to KT&G in the playoff semifinals. The new head coach is working on recruiting a new cast of assistant coaches.

“From the people whom I’ve spoken to, most think highly of GS Caltex and want to be a part of the team. I can’t speak in detail at the moment but I’m working to include a former female volleyball star on the coaching staff,” Cho said.

According to GS Caltex officials, Cho has always emphasized providing fans with an exciting and entertaining brand of volleyball, and that scored big with the team.

The former national team member, a star athlete in her prime, served as assistant coach with Hyundai Construction and as playing coach in the Italian second division after retiring from competition. Most recently, Cho served on the Korean Volleyball Federation’s committee since 2008.

She’s focused on drawing fans back to the stands and increasing interest in the sport.

“During the 1970s, there were 12 women’s teams and when matches took place at the Janchung Stadium [in central Seoul], the stands would get packed. Women’s volleyball games were the featured games, with the men’s matches taking place at the same venue afterwards. All games would get sold out,” explained Cho.

“I want to help revive the sport of volleyball. In order to do that, we must start by providing the fans with fast-paced, entertaining and action-packed games.”