[Viewpoint] Hatoyama should consider the facts

[Viewpoint] Hatoyama should consider the facts 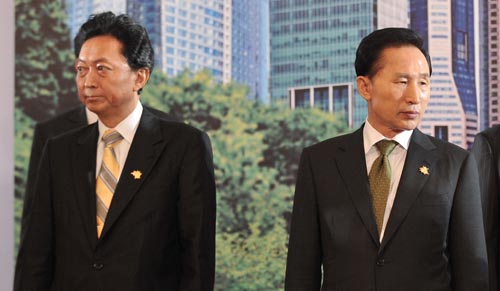 
I had the opportunity to meet with Japanese Prime Minister Yukio Hatoyama during his visit in May 2006 when he then was the secretary general for the opposition Democratic Party of Japan.

I was chosen to speak on behalf of Korea to argue the logic behind its territorial claim to Dokdo Island.

At the time, the DPJ was short of a majority in the Diet after a setback in the September 2005 elections.

Still I believed it would be meaningful for the main opposition party to be aware of the Korean argument on the Dokdo debate.

Hatoyama struck me as being sharper than he was portrayed in the media when I met him in a hotel restaurant in Seoul.

He was accompanied by two DPJ legislators and his chief secretary. The meeting was initially set for 30 minutes, but they listened to my account for more than an hour and a half. Still I wasn’t halfway through making my case when we finished.

The secretary general implied he agreed on some historical records such as the Dajokan, or Council of State, document on Korean-Japanese relations by the Japanese foreign ministry in 1877 stating that Dokdo remained unaffiliated with Japan, which pointed in favor of Korea’s claim to the island.

But the 1951 Peace Treaty in San Francisco that officially ended hostilities between the Allied forces and Japan had left out Dokdo on a list of territories and islands that Japan was ordered to return to Korea.

“The United States reviewed the situation and concluded the island belonged to Japan,” Hatoyama said.

He was then unaware of a confidential U.S. State Department document discovered in July 2008 denying Japan’s claim to Dokdo, or Takeshima as Japan calls the island.

He nodded in agreement to some historical evidence about the island, but disagreed with Korea’s interpretation of the San Francisco Peace Treaty that it implied that Dokdo was Korean as stated in an allied forces’ document in 1946.

He added that he supported Japan’s argument on its rightful claim on Takeshima because “I am Japanese and Takeshima is Japanese.”

I was disappointed that a politician known to be different from old-style Japanese politicians and known for his liberal views should be equally blinded by nationalist emotions to make an objective judgment.

If he still maintains that belief, the prime minister’s stance on Dokdo is that the territory may have been Korean in ancient history, but now falls under the realm of Japan as it was recognized as Japanese by the international peace treaty.

Many Japanese share a similar conviction and because Hatoyama is Japanese he must do the same.

But new records have surfaced in recent years all supporting Korea’s sovereignty rights to the disputed island.

If the prime minister hears out the new supporting evidence, he may change his mind and see the San Francisco document in a new light.

Prime Minster Hatoyama had been an open advocate of friendly and forward-looking ties with Korea and other Asian countries.

He played an active role in abolishing in December an explicit statement in high school supplementary social studies textbooks defining Takeshima as a Japanese territory.

When asked about Dokdo by reporters recently, he said the Japanese government has not changed its position on the island, but fell shy of claiming the island as Japanese.

The foreign minister also declined to say Korea was “illegally” occupying the island by stationing coast guards on the islet.

The prime minister and his cabinet member may have wanted to avoid making sensitive comments that can affect the upcoming election in July amid declining approval rates.

But as the prime minister and I graduated from the same high school and the University of Tokyo, I sincerely hope he can look beyond political and nationalist considerations to make a decisive step toward his professed goal of bringing the East Asia community closer by setting our shared history straight.

*The writer is a professor of Japanese studies at Sejong University.
Translation by the JoongAng Daily staff.