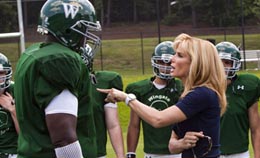 When Michael Oher (Quinton Aaron), a poor, oversized and under-educated 18-year-old, is taken in by the Tuohy family he faces a completely different set of challenges. When he expresses an interest in football, Leigh Anne Tuohy (Sandra Bullock) does everything she can to help him. The Tuohys not only provide him with a loving home, but help him improve his grades to the point where he qualifies for an athletic scholarship. As a football player and student, Oher works hard and, with the help of his coaches and adoptive family, becomes an All-American football offensive tackle.

The movie is based on the book by Michael Lewis, which is itself based on a true story.

After their divorce, Milo Boyd (Gerard Butler) and Nicole Hurly (Jennifer Aniston) start new lives, he as a bounty hunter and she as a reporter. One day, Boyd learns that his next target is his bail-jumping ex-wife. He thinks all that’s ahead is an easy payday, but soon realizes that nothing is ever easy with him and Hurly, who gives him the slip so she can chase a lead on a murder cover-up.

The exes continually one-up each other - until they find themselves on the run for their lives. They thought their promise to love, honor and obey was tough - but staying alive is going to be a whole lot tougher.

This film depicts a lone man who fights his way across America in order to protect a book that holds the secrets to saving humankind.

Eli (Denzel Washington) has been on a journey for 30 years, walking west across America after a cataclysmic war that turned the earth into a total wasteland. The world has become a lawless civilization; the barren roads belong to gangs of cutthroats who rob and kill for food and water, or just for fun.

Eli is a peaceful man who acts only in self-defense, but when challenged he becomes a warrior with unbelievable killing skills. He is on a mission to protect the book and take it to its final destination, knowing that it is the only hope for the future of humankind. 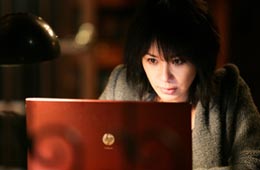 Baek Hee-soo (Uhm Jung-hwa), a renowned best-selling writer, has faced charges of plagiarism for the past two years. Since then, she has lost her fame and hasn’t written anything. With help of a friend, who is a publisher and editor, Baek tries hard to overcome her slump and attempts to make a comeback. She retreats to a villa with her daughter to write a new book. Shortly after her arrival, she begins to hear strange, mysterious sounds and begins to talk with the unidentifiable thing calling to her. The thing tells stories about events that have happened in the villa in the past, and Baek uses them as material for her book. When the book is published, Baek makes a successful comeback, but soon, it is discovered that the stories are exactly the same as the contents of a book that was published 10 years ago. Baek goes back to the mysterious place to clear her name, and faces a series of odd and mysterious incidents.

In July 1950, at the beginning of the Korean War, a young boy Jjang-i (Sin Myeong-choel) and his friends are unaware of the events unfolding around them as they prepare for a singing contest. When the U.S. Army is defeated, the enemy moves toward Jjang-i’s village, which lapses into chaos. The villagers, who believe that the U.S. Army will protect them, see their lives begin to change when the village is bombed and people are shot.

Daniel (Pablo Pineda), 34, is the first European with Down’s syndrome to have graduated from university. When he starts a social services job in Seville, he meets Laura (Lola Duenas), his free-spirited co-worker. The two become fast friends, but begin to have problems when Daniel finds himself falling in love with Laura. These two rebellious souls refuse to bend to the rules, eventually finding friendship and a love unlike any they have ever known.

It’s the summer of 1979 and seven teen boys are making trouble in a peaceful town in the countryside. The group, which is led by Mamachari (Hayato Ichihara), is concocting plans to undermine the new police officer Chuzaisan (Kuranosuke Sasaki), who has been thwarting their plans since he arrived.