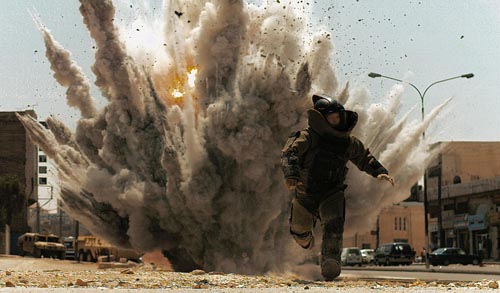 “The Hurt Locker” has been acclaimed for its realistic depictions of the complex inner world of soldiers fighting in the Iraq War. The movie won six awards, including Best Director and Best Screenplay, at the 82nd Academy Awards last month. Provided by the distributor


Even in the United States, which is seen from afar as a nation of chances, there are certain areas which are off limits to women. One of them is Hollywood.

Although a handful of female directors have had success on the big screen - Nancy Meyers, Nora Ephron and Sofia Coppola - their careers have been built around romantic comedies or melodramas.

Unlike her peers, however, Kathryn Bigelow chose a different path, making action-packed films such as “Near Dark” (1987) and “Point Break” (1991). Early last month, she finally succeeded in breaking Hollywood’s glass ceiling when she became the first woman to win the Best Director award at the 82nd Academy Awards for the critically-acclaimed war film “The Hurt Locker.” The war film also earned other five awards from the Academy.

Here are excerpts from an e-mail interview with the 59-year-old director, who has been making films for the past 32 years.

The Hurt Locker will be released on April 22 at theaters nationwide.

A. If there’s specific resistance to women making movies, I just choose to ignore that as an obstacle for two reasons: I can’t change my gender, and I refuse to stop making movies. It’s irrelevant who or what directed a movie, the important thing is that you either respond to it or you don’t. There should be more women directing; I think there’s just not the awareness that it’s really possible. 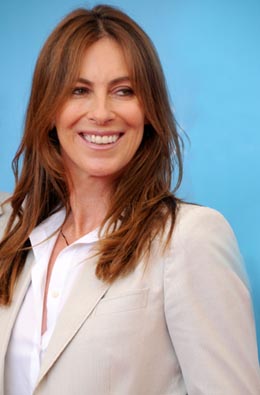 It’s hard to get rave reviews from critics, but they loved your film. What made The Hurt Locker so successful?

It is very well scripted. It was from [screenwriter] Mark Boal’s own experience and his first-hand observations. We had great, talented, creative actors who took it upon themselves to do a lot of the homework. We had an incredible special effects department headed by Richard Stutsman. We had cinematographer, Barry Ackroyd, and so many incredible and creative crews.

What attracted you to this story in the first place?

Well, actually, I became familiar with [Boal’s] journalism and turned one of his articles into a television series [Fox’s “The Inside”]. That took a fair amount of time. At that time - it was 2004 - I realized he was going off to do an embed in Baghdad with a bomb squad. And not unlike the general public, I felt fairly unaware of what was going on in Baghdad. I think it’s a war that has been underreported in many respects, so I was extremely curious, and I kind of suspected that, providing he survived, he might come back with some really rich material that would be worthy of a cinematic translation, and that’s what happened. So then he came back and we started working on the script in 2005, raised the money in 2006, shot in 2007, cut it, and here we are. These things take time, is all I’m trying to say. I think what people don’t realize is how long these things can take in development. I’ve always developed all my own pieces, and they’re time-consumers.

The Hurt Locker is quite different from other war movies. What made you use the documentary format and why did you choose not to incorporate much music or sound effects?

When Mark came back and had done such an extraordinary job in the field, we really wanted to protect the reportorial aspect. Keep it as authentic and immediate and raw and visceral as possible. But on the other hand, it is a film, so I wanted to strike a tonal balance between substance and entertainment. And I think the script quite skillfully did that.

I think it’s a movie about the bomb squad, the bomb squad specific to Iraq. People can draw their own conclusions. As a filmmaker, it’s not for me to draw a conclusion for an audience member. I see the movie as humanizing the soldier and these particular soldiers. It doesn’t cause me to walk out of the theater and think X. It’s a nonpartisan piece that actually puts a human face on a conflict that I think is fairly underreported.

The explosion scenes were impressive. What did you do to make those scenes realistic?

We made a point to try to recreate those explosions as realistically as possible. We had an incredible special effects department headed by Richard Stutsman, and that first explosion in downtown Amman was about four stories high. We had several cameras capturing it, and it was a fairly remarkable, fairly accurate recreation of [other explosions]. My intention was to put the audience into the soldiers’ shoes and into the humvee.

Why did you choose to film in Jordan and what obstacles did you face while you were there?

At one point we discussed shooting in Iraq but I think somebody said something about snipers if we went across the border, so it was a decision that was not debated for long.

Shooting in Jordan was hot. That was one of the more punishing elements. The average temperature during the day when we were shooting was 110 degrees. The prospect of heat stroke was ever present. That was probably the single most challenging aspect of the film. But Jordan was a film-friendly country and secular and hospitable.

What is a “hurt locker”?

In Iraq, the term “hurt locker” is a colloquialism among soldiers for a place of ultimate pain. It was a lot of things for a lot of people.

You know it doesn’t matter what I think so much, it’s how one interprets it. That is why I love the movie title, I love the characters because it’s so rich, and they are not one note, and there is room for interpretation. I love that.