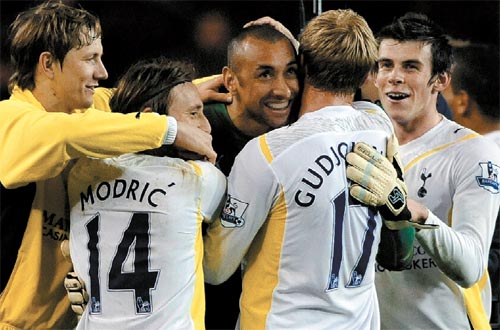 
LONDON - Taking a page from their bitter rival’s gamebook led Tottenham Hotspur to their first Premier League victory over Arsenal in 11 years on Wednesday.

Resilience, determination and superb defending resulted in a 2-1 victory for the Spurs and revived their hopes of Champions League soccer next season.

For their part, Arsenal’s gallant title bid appears over.

“It’s left us too much to do,” Arsenal manager Arsene Wenger told reporters. “We lost a game we could not afford to lose. It showed we are not yet mature enough to win the title because to do that you have to win games like this.”

“We have been in good form with six wins from our last seven league games and we have got a chance now of challenging again.

“It was a real London derby and very competitive and we lifted ourselves up,” he said.

The Spurs, whose mental fragility against the Big Four has often been exposed, found inner reserves of strength they badly needed.

A stunning goal in his League debut from 19-year-old Danny Rose, an England Under-21 international signed from Leeds United for 1 million pounds ($1.54 million) three years ago, set the Spurs on their way.

Rose, who had played in League Cup and FA Cup matches this season but had not appeared in the League side, was lurking 30 meters from goal. He volleyed a punched clearance by Arsenal goalkeeper Manuel Almunia straight back at him and into the net to raise the temperature even higher at an already bubbling White Hart Lane.

A second goal a minute into the second half from Gareth Bale, who slotted home after being played onside by Bacary Sagna, put the Spurs in command.

Arsenal, dominating the match for long periods with some great but ineffective possession football, wrestled the initiative back from the Spurs with 22 minutes to go when Dutchman Robin van Persie replaced Denilson after five months out with ankle ligament damage.

Van Persie made an almost immediate impact, creating chances and driving Arsenal forward rather than sideways.

Although Arsenal pulled one back with Nicklas Bendtner scoring after 85 minutes, they were denied a second goal as Spurs goalkeeper Heurelho Gomes pulled off four majestic saves in four minutes.

Three were off Van Persie and one from the returning ex-Tottenham skipper Sol Campbell, who was booed and jeered every time he touched the ball - and often when he did not have it.

“Gomes is the most improved goalkeeper you will find anywhere,” Redknapp enthused.

It was not only Gomes’s heroics that brought Spurs their long-awaited victory over Arsenal.

They battled tirelessly in midfield with Luka Modric and Tom Huddlestobe more direct than Samir Nasir and Tomas Rosicky, and counterattacked with greater urgency and sharper passing - much as Arsenal have always done.

“They were sharper than us, and they won more 50-50 balls,” Wenger conceded.

The result left Spurs fifth on 61 points with five matches to play, one point behind Manchester City in fourth spot, which brings with it the chance of Champions League football.

Arsenal remained third, six points behind leaders Chelsea, but with only four games to play their title hopes are virtually over. Neither team will win any silverware this season, but for the Spurs, a real prize in the form of a first shot at the Champions League would represent success from a promising season.