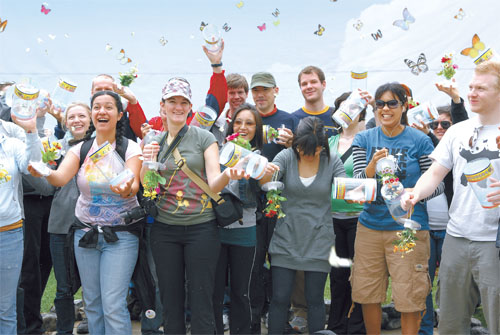 The Hampyeong Butterfly Festival kicks off on April 23 and runs to May 9. Provided by the organizer.By Park Sun-young

HAMPYEONG - We mark the start of spring in many ways: the lasting warmth of the sun, the need for lighter clothes, and of course, the sudden bursts of color in the flowers and trees. Flowers are generally considered the “herald of spring.” And with them come the butterflies. In some cultures these insects represent rebirth and in others, love. Sometimes they bring you luck and at other times they fly around in your stomach, making you nervous.

In Korea, the best place to see butterflies is Hampyeong, South Jeolla. 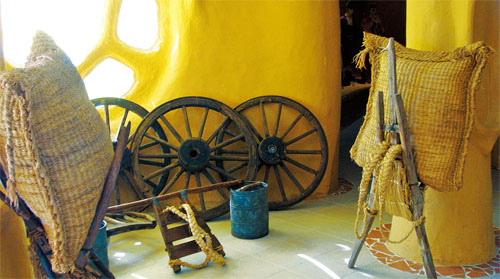 The Korean Artifacts Museum has more than 1,000 pieces on display. By Park Sun-young

The city was not well-known to the Korean public, let alone foreigners, until 1999, when the regional government launched a new festival there dedicated to butterflies.

The Hampyeong Butterfly Festival, which marks its 12th anniversary this year, is considered one of the most successful regional festivals in the country. Last year, it attracted 530,000 visitors, which is an impressive figure for a local festival. 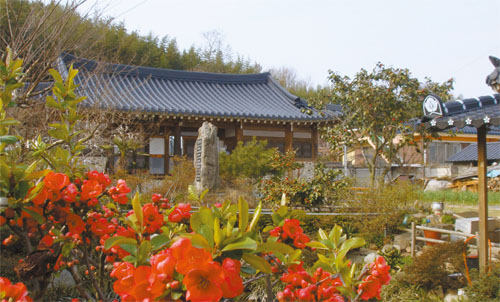 At Mopyeong Hanok Village, tourists can experience life in a traditional Korean-style house. By Park Sun-young

Hampyeong is known for its clean environment, and a recent visit to the city proved that the region has indeed maintained its fresh, tranquil atmosphere.

A stroll in a pastoral field, the magnificent view of the setting sun at the beach, a visit to a hanok (traditional Korean house) village and a fulfilling meal with rice bowls and side dishes that are always full to the brim - these are some of the many things you can expect on a visit to Hampyeong.

The festival kicks off next Friday and runs until May 9. The following are a few recommendations for what to do when you go.

This is the main festival venue. Here, visitors can learn about butterflies through a wide range of exhibits featuring butterflies both as fossils and as living creatures. There will also be displays featuring other insects and rare animals such as red bats.

At nearby Cheonsubyeon Park, there is a petting zoo and various outdoor activities such as traditional Korean folk games, booths with regional foods and a display about natural dyeing techniques where visitors can try to dye their own cloth.

This is the main festival venue. Here, visitors can learn about butterflies through a wide range of exhibits featuring butterflies both as fossils and as living creatures. There will also be displays featuring other insects and rare animals such as red bats.
At nearby Cheonsubyeon Park, there will be various outdoor activities such as traditional Korean folk games, booths with regional foods and a display about natural dyeing techniques where visitors can try to dye their own cloth.

This three-story museum has more than 1,000 artifacts including clothes and accessories (on the first floor); traditional Korean agricultural implements, fishing devices and hand-weaving tools (on the second floor); and accessories used in marriage and memorial services as well as old musical instruments (on the third floor).

A visit to the museum will allow the younger generation to learn about the older generation, while older people will be given the unexpected pleasure of reflecting on their childhoods. It is also a good place for non-Koreans to learn about Korean traditions.

This cluster of traditional Korean houses is located in the Mopyeong area, where the district of Mopyeongheon was originally located during the Goryeo Dynasty (918-1392). The village is also where the Papyeong Yun clan has lived since the time of King Sejo (1417-1468), the seventh king of Joseon.
Visitors can stay overnight in the village in one of the dozen hanok that operate as guesthouses. Most of these offer a one-night stay for around 50,000 won for a double occupancy room.
This is a great way to experience life in a hanok as well as get a taste of country life.
The village is about eight kilometers, 20-minute drive from Hampyeong Expo Park and Ecological Park. For more information about the village and its hanok program, call the town hall at (061) 323-8288.

For general information about the Hampyeong Butterfly Festival, contact the Hampyeong County Office’s culture and tourism department at (061) 320-3733 or visit or visit www.hampyeong.jeonnam.kr/2008_hpm/hpm01/ (Korean only).
During the festival period (April 23 to May 9), Korail will run the KTX bullet train from Seoul to Hampyeong six times a day. The train leaves Seoul’s Yongsan Station bound for Hampyeong at 7:20 a.m., 9:10 a.m. and 11 a.m. It leaves Hampyeong Station for Seoul at 3:18 p.m., 5:08 p.m. and 7:18 p.m. The travel time between the two cities is about three hours. For more information, contact the Gwangju branch of Korail at (062) 525-4835.