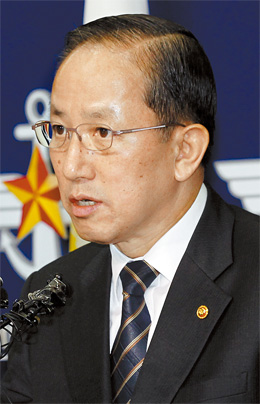 As an initial examination of the Cheonan’s wreckage confirmed that an external explosion most likely sank the warship, in its strongest characterization to date the Lee Myung-bak administration yesterday called the tragedy a grave national security issue and admitted that the military had been too slow to respond to the crisis.

Defense Minister Kim Tae-young apologized for the ministry and the military’s poor handling of the “unprecedented incident” and for losing the public’s trust.

“The government and the military see this incident as a grave situation of national security,” Kim said at a press conference yesterday, amid mounting concerns of possible North Korean involvement. “We are doing our best to cope with it.”

After Kim spoke, a top investigation official announced that the probable cause of the Cheonan’s sinking was an external blast.

“After a visual inspection of the severed section of the ship and the interior and exterior of the hull, we concluded that an external explosion is highly likely to be the cause, rather than an internal explosion,” said Yoon Duk-yong, a scientist heading the joint military-civilian investigation team.

The 1,200-ton Navy corvette sank on the night of March 26 in the Yellow Sea near the inter-Korean border after an unexplained explosion tore the ship in two. After weeks of rescue and salvage operations, 38 sailors have been confirmed killed in the tragedy, while eight are still unaccounted for.

According to Yoon, a professor emeritus at the Korea Advanced Institute of Science and Technology, the initial examination of the salvaged stern ruled out the possibilities of internal explosion and metal fatigue. The theory that the Cheonan was wrecked on a rock was also dismissed, Yoon said.

“The metal plates of the hull were bent toward the inside,” Yoon said. “The right side of the hull was destroyed and opened, so it appeared that the explosion took place on the right side. It is the experts’ judgment that such damage was caused by an outside explosion.”

Asked if the ship could have been destroyed by a bubble jet created by an underwater explosion, rather than directly hit by a torpedo or a mine, Yoon said, “We are reviewing both possibilities that the ship was damaged by direct contact or by an explosion that took place near the ship without direct contact.”

Yoon said more detailed analysis is needed after the bow and other debris have been salvaged. Including civilian experts and U.S. navy specialists, 38 investigators participated in the initial examination, he said.

Army Lieutenant General Park Jung-yi, the military chief of the joint probe team, said debris has been collected to analyze the cause, and operations are ongoing to collect more evidence at the site of the sinking.

But even as the investigators announced their initial findings, the Blue House yesterday asked the public to wait for the final results of the probe.

“The unprecedented incident took place near the inter-Korean border, and it’s natural that the military sees this as a national security situation and the public is concerned about it,” said Blue House spokesman Park Sun-kyoo. “The incident made all of us aware that this peaceful land can be gripped by concerns in an instant. This is the reality of a divided Korea. Until a final, scientific conclusion is made about the case, we will not assume anything.”

As the investigation moves forward, the United States showed concern that any involvement by the North could have serious consequences on the international efforts to resume the stalled six-party nuclear talks.

“Let’s not jump to a conclusion here,” a U.S. State Department official said in Washington yesterday (Korean time). “I wouldn’t necessarily link them together. But obviously certain results could have a profound effect.”

While the defense minister’s characterization of the incident was the strongest such statement to date, the sinking had been treated as urgent since its earliest hours. President Lee held his first emergency meeting with security ministers and Blue House aides within an hour of the sinking, and has met with them to discuss the matter several times since then.

Nonetheless, Kim admitted that the military failed to handle the initial stages of the crisis successfully.

“Since the administration launched, the military has established an immediate combat-ready posture by reinforcing operational authorities of field commanders and updating the operations rules near the de facto maritime border of Northern Limit Line in the Yellow Sea,” he said. “Despite that effort to strengthen our national security, we were baffled by this unexpected incident.

“We will make the outcome public as soon as it is revealed, and we will devise a clear and strict countermeasure,” the minister said.

The military will request the Board of Audit and Inspection to probe its initial handling of the disaster and take any necessary measures to improve its shortcomings.

Of the 104 men aboard the Cheonan at the time of the explosion, 58, including the captain, were rescued, while 46 were unaccounted for shortly after the sinking. Thirty-eight of the missing sailors’ bodies were found, and the families of the remaining eight yesterday asked the military to call off the search for them.

A Blue House official said all those who died in the disaster will be considered killed in action and proper arrangements will be made for their families.