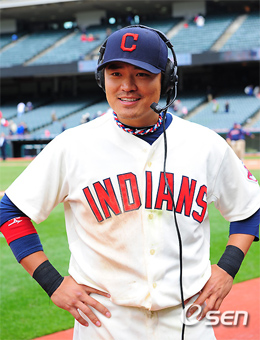 Cleveland Indians right fielder Choo Shin-soo drove in the winning run to help his team earn a 3-2 win over the Chicago White Sox at home yesterday.

Choo started the game as the third batter in the Indians’ batting order and went one-for-four and drove in two runs on the day. He kick-started the Indians’ offense by driving in the opening run in the bottom of the first.

He drilled a line drive to right field at the bottom of the first to drive in Grady Sizemore and for what appeared to be an RBI double. But Choo was eventually called out for apparently failing to step on first base before he made his way toward second.

“The video showed he touched the bag,” Indians’ manager Manny Acta was quoted as saying on the team’s Web site. “I’m not much for instant replay, because I like the human element in the game. But sometimes I see why people push for it.”

The Indians were able to hold the lead until the White Sox managed to score a run in the top of the sixth and seventh innings to take a one-run lead into the eighth inning. Choo and Asdrubal Cabrera responded by driving in two-runs in the bottom of the eighth inning for a comeback win.

Cabrera smashed a one-run home run to right field with one out. Then with Sizemore on first, Choo hit an RBI double to the left-center field area to drive in the winning run.

“He [second-base umpire Jerry Layne] said I didn’t touch first base,” Choo stated on the Indians’ Web site. “I said, ‘Say what?’ He scared me. I thought I had to go back to first base. But he was just kidding.”

After getting off to a slow start at the start of the season, Choo is now hitting a respectable .324 on the season and improved the number of RBI to seven.

Meanwhile, Kim Tae-kyun of the Chiba Lotte Marines (Nippon Professional Baseball) extended his hitting streak to six but the Marines’ five-game winning streak came to an end against the Orix Buffaloes yesterday.

Orix scored a run in the sixth inning and Kim responded with an RBI single in the bottom of the sixth. Orix scored a run in the seventh and eighth innings for a 3-1 lead into the ninth. The Marines managed to score a run to narrow the lead to 3-2. Then, with the bases loaded and two outs in the ninth inning, Kim had a chance to come up big for his team but flew out to the shortstop to end the game.

The Marines are currently in first place in the Pacific League with a record of 16 wins, six losses and one draw.