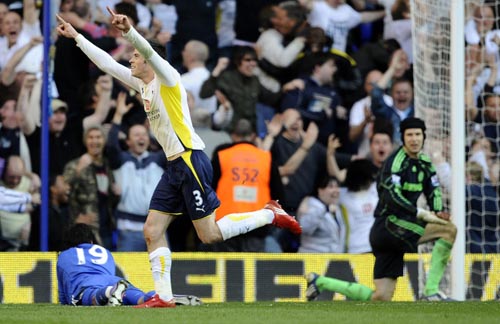 
LONDON - Tottenham Hotspur breathed fresh life into the English Premier League title race with a 2-1 win over leaders Chelsea on a dramatic day of top-flight action in England on Saturday.

Spurs’s win, secured by goals from Jermain Defoe and Gareth Bale, cut Chelsea’s lead over defending champions Manchester United to just a point with three games left to play. And to make matters worse for visitors Chelsea, they finished the match against their London rivals down to 10 men after captain John Terry was sent off for two bookable offenses at White Hart Lane.

But defiant Chelsea manager Carlo Ancelotti told ESPN: “The title is still in our hands, we don’t have to be afraid, we just have to look to the next game against Stoke.

“We didn’t do so good but Tottenham played very well,” the Italian added.

Tottenham’s victory meant Harry Redknapp’s side, who last weekend lost an FA Cup semifinal to Portsmouth before bouncing back in Wednesday’s north London derby against Arsenal, moved into fourth place. That left them two points clear of Manchester City in the race for the final Champions League spot on offer to English clubs.

“They’ve been fantastic,” said Redknapp of his team. “After the disappointment of last Sunday to come back with these two wins is top class.

“We were even better today than we were against Arsenal, in the first 30 minutes we completely dominated.”

Defoe put Spurs ahead from the penalty spot in the 15th minute after England defender Terry handled in the box and Bale, on target in the 2-1 win over Arsenal, doubled the lead a minute before halftime when he beat Petr Cech at the goalkeeper’s near post.

Terry, already booked for a foul on Roman Pavlyuchenko, was sent off for a second yellow card offense by referee Phil Dowd after he went to ground and brought down Wales international Bale in the 67th minute.

Spurs, who wasted numerous chances to kill the game off, saw Chelsea pull a goal back in stoppage time through England midfielder Frank Lampard.

There were barely 20 seconds left in the three minutes of added-on time at the end of the match when Scholes headed in Patrice Evra’s cross at Eastlands.

“Towards the end, City made a bit of a charge, it got a bit open, the game, and I decided to push Scholesy forward a bit and it paid off,” explained United manager Sir Alex Ferguson.

City’s Italian boss Roberto Mancini, while disappointed by defeat, insisted his side’s bid for Champions League was still on course.

“The crucial match will be against Tottenham here [on May 5],” he said.

Sunderland edged Burnley nearer relegation with a 2-1 home win where Frazier Campbell and Darren Bent scored for the Black Cats in the first half before Steven Thompson pulled a goal back for the Clarets eight minutes from time.