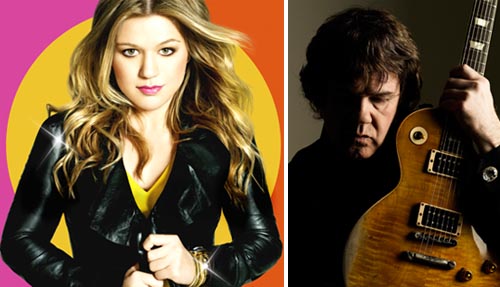 Clockwise from top left: Kelly Clarkson, Gary Moore, Deep Purple and Chuck Mangione are just a few of the world-renowned artists set to hit Seoul stages in the coming months. Provided by the concert agencies


Jeff Beck and Bob Dylan, who had their first concerts in Seoul last month, are just a few of the hot talents performing in the capital city this year. Next up is legendary guitarist Gary Moore, who will make his first visit to Korea on April 30. He will be followed by pop and jazz artists such as Chuck Mangione, Kelly Clarkson, Leif Garrett, Deep Purple and Mika in concerts scheduled through early June.

Gary Moore’s visit to Korea has been highly anticipated since the 1980s but the singer’s health has prevented him from being able to make the lengthy flight to Asia from his home in Brighton, England, according to Access Entertainment, his concert agency here.

A PR manager from the agency said, “Many overseas artists often say that this is going to be their first and last performance in Seoul, but with Gary Moore, it is definitely true.”

Apart from his musical virtuosity with blues, metal or rock ‘n’ roll, Korean fans tend to be emotionally attached to the 58-year-old musician largely because of his 1983 song, “Murder in the Sky,” whose lyrics depict the tragic fate of Korean Air Lines flight 007, which was shot down by Soviet jet interceptors on Sept. 1, 1983, just west of Sakhalin Island. The incident killed 269 passengers and crew members. Whether or not the Irish guitarist and singer will sing the song in Seoul is not clear, given the recent crash in western Russia of the plane carrying Polish President Lech Kaczynski and his wife. But there is a good chance he will perform past hits, such as “Empty Room,” “Always Gonna Love You” and “Still Got The Blues.” Before coming to Seoul, he will tour Japan from April 22 through 28.

Meanwhile, U.S. recording artist Kelly Clarkson will have her first concert here on May 4. A day before the concert, the artist, who won the first season of “American Idol” in 2002, will appear on “Superstar K,” a Korean cable TV show modeled after American Idol, as a judge.

American flugelhorn player and composer Chuck Mangione, who is best known here for his jazz-pop single “Feels So Good,” plays his fifth concert in Seoul on May 2. Geni World, the concert agency, says the concert program is not set because he will be improvising the repertoire on stage. His 2001 album, “Everything for Love,” includes a track called “Seoul Sister,” which he said he composed after being enchanted by the beauty of Korean women’s eyes.

Deep Purple, the classic hard rock band, is set to shake the capital city on May 18. It will be the group’s fourth appearance here since 1995. The concert organizer is offering a special discount to men ages 35 and older, many of whom grew up listening to the band.

British singer-songwriter Mika was apparently impressed with his Korean audience, given that he is returning to Seoul on June 12, just seven months after his first concert here. After the concert, the audience will be invited to stay and watch the Korea-Greece match, televised from the 2010 World Cup in South Africa.

Leif Garrett, a former teen idol who was at the height of his popularity in the 1970s, is making his first visit to Korea in 30 years. He will perform in Seoul on May 8 and 9 and in Busan on May 11. The former heartthrob was arrested for drug possession in February, and pleaded not guilty. He was later freed on bail.

Moore, Clarkson, Garret, Deep Purple and Mika will perform at different venues at Olympic Park in southeastern Seoul, and Mangione will appear at the Sejong Center for the Performing Arts in central Seoul. For more information, visit http://ticket.interpark.com/Global.