Calling the souls of the deceased

Calling the souls of the deceased 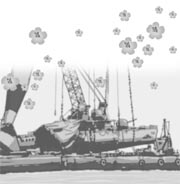 In the old days, people thought the soul slipped out of the body when one succumbed to death, and they thought it was necessary to hold onto the soul before it disappeared into thin air.

A person went up to the roof of the house carrying a robe of the deceased and then waved it toward the north, which was where the next world was, shouting “come back” three times. This is the ritual of “calling the soul back,” and was performed according to Confucian traditions.

When a king passed away, the ritual was also performed for him. One of the eunuchs would climb the roof of the royal palace holding the royal robe. Holding the collar of the robe with his right hand and gathering it at the waist with his left, he shouted, “Your Highness! Please come back!” three times, according to Shin Myong-ho, the author of “Joseon Royal Court Culture: Ceremonial and Daily Life.”

In Anhui Province of China, they had the tradition of calling back the soul of children who had died at an early age. When one person shouted out, “Come on, where are you? You should come home. Where are you, shivering in the cold? Come back home,” another person would say, “The child has come back home.”

As everyone moved around, shouting that the child had come home, one member of the family would take out a piece of clothing belonging to the deceased, hang it on a tree near the house and watch for the rustling of a leaf or the movement an insect because it could be a sign that the soul of the child had returned, wrote Philip A. Kuhn, the author of “Soulstealers: The Chinese Sorcery Scare of 1768.”

Franz Schubert’s “Litanei,” which starts with “All souls lie in peace.?.?.” describes a similar custom originating in the German state of Bayern, where they consoled the soul of the dead by calling it back to this world. Girls in Bayern visited the tomb of a girl who died before marriage, singing songs and laying flowers around the graveyard.

Laying flowers to honor the dead is an act of consolation for the living. The virtue of sacrifice in Buddhism is based on the same philosophy.

The bodies have been found of 38 young men who perished in the sea off Baengnyeong Island when the Navy patrol ship Cheonan sank. The whereabouts of eight of their comrades are still unknown.