Cheonan case could be brought to UN: minister

Cheonan case could be brought to UN: minister 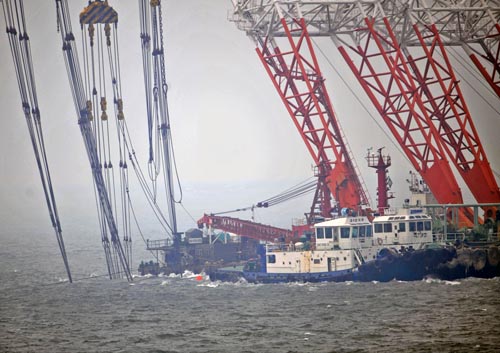 Operations continue yesterday to lift the bow of the Cheonan at the sinking site near the disputed inter-Korean border in the Yellow Sea for the investigation into the cause of the accident. The stern, salvaged last week, arrived at the Navy base in Pyeongtaek, Gyeonggi, for further probe. [NEWSIS]


Despite North Korea’s denial of its involvement in the recent sinking of a South Korean Navy warship, Seoul’s foreign minister said yesterday that bringing the matter to the United Nations Security Council is an option if Pyongyang was found responsible.

It is the first time a senior Lee Myung-bak administration official commented on possible retaliation against the North since the March 26 sinking of the corvette Cheonan in the waters near the inter-Korean border.

An initial examination of the wreckage last week showed that an external explosion sunk the ship. Defense Minister Kim Tae-young’s characterization of the incident as a “grave situation of national security” has fueled speculation about a North Korean involvement.

“Although I am speaking about a hypothetical situation, the first thing that we can think about is taking the matter to the United Nations Security Council, if the North was proven to be behind the incident,” Foreign Minister Yu Myung-hwan said on the KBS’s “Inside the Issues,” yesterday morning.

Noting that the UN Security Council has authority to review matters related to a war, Yu said a discussion at the powerful UN organ in charge of the international security and peace is possible. The two Koreas are technically still at war because the Korean War ended with an armistice in 1953.

The Blue House said yesterday President Lee will issue a special message to the nation today regarding the Cheonan’s sinking.

On the KBS program Yu also said it is important to strengthen and improve the joint defense posture of the United States and South Korea against the North. “In addition to that, it is important to cooperate with other friendly nations such as the European Union, Japan, China and Russia to deal with this matter,” Yu said. “We have to cope with the situation through bilateral cooperation with countries that share our views.”

“It’s premature to identify the accurate cause [of the sinking],” Yu said. “The government is preparing for all possibilities, but it is inappropriate to make public all the options at this point.”

The foreign minister’s remarks came as North Korea broke its silence on the incident to deny its involvement. “The military warmongers are getting more undisguised in their moves to link the accident with the North although it was caused by their fault,” the North’s military said in an English-language statement released Saturday. “This is all a plot against the DPRK [North Korea] and they are trying to create an international consensus against it.”

In an unusually lengthy statement, the unidentified military commentator of the North also claimed that the Lee government was trying to blame Pyongyang in an attempt to boost sagging popularity ahead of the local elections in June.

Investigators in the South began examining the salvaged stern of the Cheonan yesterday following its arrival at the port of Pyeongtaek, Gyeonggi, Saturday evening. The Cheonan was split into two pieces and the rear section of the ship was salvaged last week. Operations continued over the weekend at the sinking site near Baeknyeong Island to salvage the bow.

A scientific analysis on the 170 pieces of debris collected near the sinking site is currently ongoing by military and civilian experts, a military source said yesterday. Most of the fragments were believed to be parts of the Cheonan, and no splinters from explosives were discovered yet, the source said. The military will continue to find “meaningful debris,” he added.