New lease on life for a malodorous stream

New lease on life for a malodorous stream 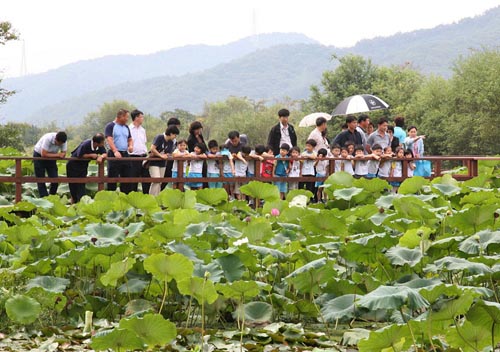 Visitors view lotuses from a bridge at the Gyeongan Ecology Park one sunny day in Toichon, Gwangju of Gyeonggi Province. Provided by the Shinsegae Group

Lotus flowers bob in a stream as cattails and irises push up their shoots on the banks of a wetland. Mallards dive underwater in search of food, as eight herons fly overhead. Despite the cold snap, 10 people stroll through the nearby park.

Only five or six years ago, this was the last place most residents would think to visit for a morning walk. The water was unclean, and the area smelled bad.

Today the Gyeongan Ecology Park in Toichon, Gwangju, Gyeonggi Province, is a transformed place. In early 2007, Shinsegae Group CEO Koo Hak-su stopped by the park and learned about the stream’s poor water quality. Koo adopted the stream as a social-contribution project, spending 500 million won ($450,000) to plant 27,000 lotuses, 3,300 irises and 7,000 trees.

His efforts bore exquisite fruit. One 70-year-old resident says that these days, “Walking around the park to see the botany and birds is quite an exercise. In summer the lotus flowers bloom and in winter migratory birds flock to the park. Many people love to come and see them.”

The park rehabilitation has been such a success that the Ministry of Environment is hoping that other companies will follow Shinsegae’s example. On Thursday, it launched a campaign encouraging corporations to take part in improving the water quality of Korea’s streams.

The Gyeongan stream had been identified as the major cause of pollution at the Paldang dam, the water resource for more than 20 million inhabitants of the Seoul metropolitan area. Since the Yongin and Gwangju city governments each built a sewage disposal plant, and Shinsegae contributed the pollution-absorbing plants, the water quality has improved markedly.

Kang Cheon-sim, a director of a local group campaigning to save the Gyeongan stream, said he welcomes the ecology park.

“The water gets cleaner only when there are people who regularly visit the site for refreshment, because the regulars can see whether things are improving or worsening,” Kang said.

Shinsegae Group has also dedicated another 2.1 billion won to transform the nearby Geumhak and Mokheyon streams into ecology parks.