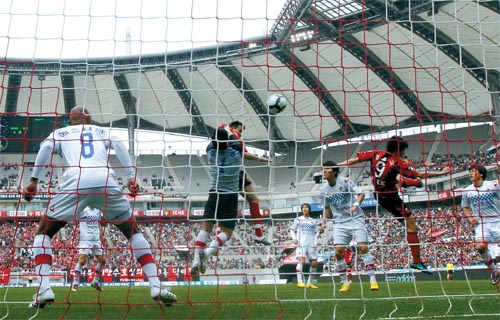 With the loss of two star players, FC Seoul has become a different squad this season by relying more on a team-oriented strategy.

And leading the way is the unselfish play of Montenegrin forward Dejan Damjanovic.

Known for his acute ability to get the ball in the net - he racked up 48 goals and 10 assists in 94 K-League appearances up until the end of last season, after all - Dejan consistently ranks among the top forwards in the league.

However, with star midfielders Lee Chung-yong and Ki Sung-yeung joining European teams last season, Dejan has shifted his focus away from a score-first approach. Dejan currently has two goals and five assists on the season, the first time in his career that he has recorded more assists than goals.

In FC Seoul’s April 18 game against Ulsan, Dejan scored the opening goal in the 30th minute and also assisted on goals by Adilson os Santos and Ha Dae-sung. FC Seoul won the match 3-0, ranking as the club’s fourth consecutive win dating back to a March 27 game against the Pohang Steelers.

The team currently sits in first place with a record of six wins and one draw.

The single most impressive outing for Dejan this season was the rivalry match against the Suwon Bluewings on April 4. Incorporating a pass-heavy style of play preached by assistant coach Ahn Ik-soo, Dejan assisted on all three of FC Seoul’s goals, connecting on nifty heel passes on two occasions.

“I want to win the league title this season. All the players on the team are enjoying practices and games,” Dejan said. “I want to work hard toward winning a title instead of focusing on personal goals.”

Dejan recorded 19 goals and three assists in 2007, 15 goals and six assists in 2008, and 14 goals and one assist last season. He also, however, had a few run-ins with the previous coaching staff.

New Portuguese manager Nelo Vingada and Ahn and their contrasting approach to coaching are the biggest factors in Dejan’s changed stance. While Vingada is known as a jovial and optimistic character who treats his players with care, Ahn is known as one of the toughest disciplinarians in the league.

Ahn first made his name with the Seongnam Ilhwa Chunma team that won three consecutive league championships in the early 2000s. The Seongnam squad back then was known for its military-style discipline. Ahn was an assistant coach on the team.

Today, he is using his charismatic - albeit strict - style to push his FC Seoul players. Ahn kicked Dejan out of a team meeting earlier this season and scolded the player for failing to wear shin guards during team practices. Dejan had never worn shin guards in practice before but has taken to wearing them since his encounter with Ahn.

More importantly, Ahn has extensively studied FC Seoul game films and repeatedly showed a collection of footage of the club’s players missing out on goal-scoring opportunities.

“It served the purpose of showing our players that failing to find a teammate in better position to score goals will lead to missed opportunities,” Ahn said.

One of the players in many of the clips was Dejan, who then began to change his style of play. “The change in Dejan represents the direction we want to take as a team this season,” Ahn said.