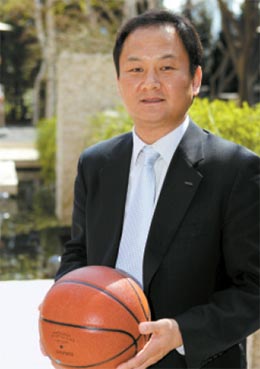 Mobis Phoebus rewarded its head coach Yoo Jae-hak with the biggest contract for the position in the history of the Korean Basketball League.

According to a statement released by Mobis, Yoo and the club reached a new five-year deal worth 2 billion won ($1.8 million). Under the contract, Yoo is set to receive 400 million won each season - 14 percent higher on an annual basis than the next-highest amount for a head coach.

Coming off a championship-winning season, Yoo’s existing contract with the team was set to expire at the end of next month.

“The club has decided to award me with a lengthy five-year deal, and I will have to work that much harder,” Yoo said. “It’s important to produce wins in a season, but I want to play a role in helping Mobis etch their name as a team with a reputation for winning.”

Yoo’s contract is the biggest since the KBL launched in 1997. Yoo received 330 million won per season via his previous contract. Chun Chang-jin, who joined the KT Sonic Boom prior to the start of last season for 350 million won per year, previously had the most lucrative contract. The duration of Yoo’s contract, which extends for five seasons, is also the longest for a head coach in league history.

The length and amount of the contract are tied to Yoo’s performance at the helm of Mobis. Yoo’s team finished the regular season with a record of 40 wins and 14 losses and tied with KT for first place in league standings. It received the first seed in the postseason based on its superior head-to-head matchup record against KT during the regular season.

Mobis went on to defeat the defending champions KCC Egis in six games in the finals. Consistency has been Mobis’ strong suit under Yoo. The squad has finished the regular season with the league’s best record four times in the past six seasons. In that span, Mobis won the league title twice. Focusing on discovering talent and nurturing players within the system, Yoo amassed a record of 185 wins and 139 losses in the past six seasons.