Born with unique parents, and talents

Born with unique parents, and talents 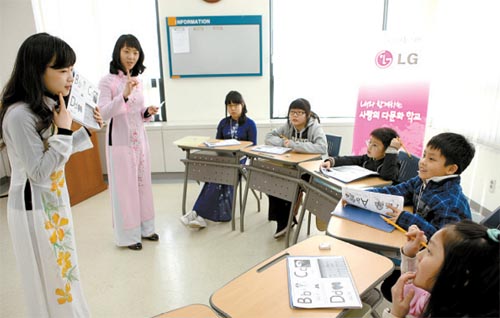 Students at the LG Global School attend a Vietnamese class at the Hankuk University of Foreign Studies in Seoul. Provided by LG Corp.

Children of multicultural families have enough problems simply communicating in the schoolyard. Opportunities for those with special gifts to nurture their talents are tragically few.

The faculties of the Korea Advanced Institute of Science and Technology, better known as Kaist, and the Hankuk University of Foreign Studies are working to fill that void as part of a special education program aimed at elementary and middle school students born to one Korean parent and one immigrant who have exhibited aptitude in language or science.

The first class in the LG Global School program - named for its sole sponsor, LG Group - took place March 13. It lasts for two years, at absolutely no cost to the students or their families.

Selection of participants began in October, when an overnight workshop took place to narrow down the list of candidates. About 80 students from fifth to eighth grade participated in the science part of the workshop, and 30 have been selected for the new science program. They will take classes at Kaist in Daejeon on the last Saturday of every month, and listen to online lectures once every two weeks.

In the languages section, 60 elementary school students applied, and 40 were chosen to study in Chinese and Vietnamese at the HUFS campus in Seoul or at the university’s affiliates in Daejeon, Gwangju and Busan on the second and fourth Saturdays of each month, along with the biweekly online classes.

“Students from multicultural families have a great deal of potential, as they acquire different languages and cultures at an early age, which will serve as an advantage for them in this global era,” said Chung Chang-won, vice president of the brand management department at LG Corp. “Our program aims to support them at an early stage so that they can display their ability to the fullest.”

One of these students is Daniel Ponomareb from Russia, a sophomore at Sangoknam Middle School in Incheon, who participated in a prep course for the science education program held in January.

“It was amazing to see robots that I made actually move. I had always been curious to know how robots move whenever I see a robot football game, and my curiosity has now been satisfied,” Ponomareb said. “I hope I can make a robot that is capable of even more different motions one day.”

Hong Gyeong-won is a first grader at Baekseok Elementary School in Goyang, Gyeonggi. Though born in Vietnam, Hong learned quite a bit from the HUFS course on Vietnamese culture and language.

“I was surprised to learn that Vietnamese people also use a money bag for the New Year’s gift money, which I thought they only did in Korea,” Hong said.

After the first session ends, LG plans to recruit new students, though a detailed schedule has not yet been drawn up, said an LG Corp. official in charge of the program.

“Our education program aims to help kids from multicultural families who are likely to be less well-off [than children born to two foreign parents] and therefore don’t have many educational opportunities,” the official added.