Immigrants get a stage of their own

Immigrants get a stage of their own 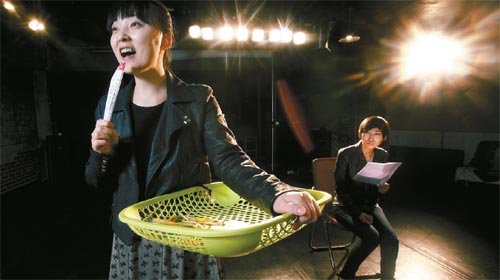 Jinguahua, in the foreground, and Dashmaa, who are regular members of Salad Theater, rehearse in Munrae-dong, northwestern Seoul, last Wednesday. They rehearse seven hours a day, five days a week. By Jeon Min-kyu


Last Wednesday afternoon, two women were talking in the basement of an old building in Munrae-dong, northwestern Seoul. The lights were low and there were tables and chairs set up around the room.

“Oh Cheol-su, my baby boy,” the older woman said, reaching out to touch the belly of the younger woman, who was big with child.

The pregnant woman timidly replied, “Mother, we don’t know yet whether it’s a boy or a girl.”

It sounded like a typical conversation between a Korean mother-in-law and her new daughter-in-law - except that it wasn’t.

The two women were rehearsing for a new play by Salad Theater for Multi-Culti Performing Arts. Since its founding just over a year ago, the company has provided marriage migrants in Korea with a chance to act and an outlet for their frustrations with adapting to a new language and culture. And through the productions they present around the country, the group is also raising awareness about the challenges faced by this growing part of the Korean population.

“It’s been about a year since I joined the company,” Dashmaa, a 27-year-old Mongolian woman who plays the daughter-in-law, said in fluent Korean.

“And I’m always the one who plays the older women - they say I’m good at it,” Jinguahua, a 33-year-old Korean-Chinese woman, said with a laugh. Jinguahua plays the mother-in-law.

Both women came to Korea via marriages to Korean men, Jinguahua in 2008 and Dashmaa in 2005. 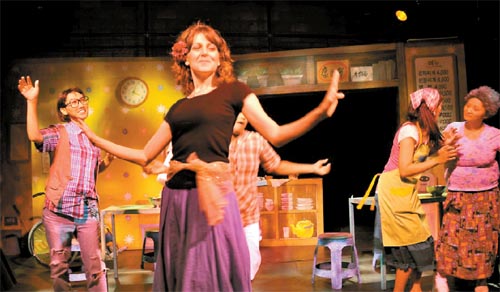 Salad Theater’s first show, “Tasty Recipe - After the Rain,” was staged in September. The theater is providing opportunities for immigrants and raising awareness about the challenges they face. Provided by Salad Theater

They are both members of Salad Theater, which was launched in March 2009 by Salad TV, an independent Internet broadcaster for migrant workers, marriage migrants and multiethnic families.

“The name ‘Salad’ reflects our aim to bring people from diverse cultures together in an environment that encourages them to maintain their respective customs - like a bowl of salad with a variety of ingredients,” said Park Kyong-ju, the head of Salad TV.

“It was originally created as a theater company comprised of marriage migrants, but we plan to expand our membership to include migrant workers.”

In September, Salad staged its first production, “Tasty Recipe - After the Rain,” which was well received and made the group better known to the public. The company has since presented a series of short plays at elementary schools, community centers and festivals around the country.

Salad operates as a pickup company, which allows people to participate for short or long periods according to their schedules. For example, there were a dozen people in the company last year, but this year there are only three, including Dashmaa and Jinguahua. The other member is a migrant worker from Nepal.

The company recently held an audition for new members, and accepted about 10 people on a trial basis. The 10 actors will participate in a workshop with the company, which lets the company and actors get to know one another before committing to working together long term.

That’s important because the company members work together to develop the scripts for their productions, based on their own life experiences.

“We gather and talk freely about our everyday life in Korea, which later becomes the basis for our plays,” Dashmaa said. “The scene where the Korean mother-in-law clashes with her foreign daughter-in-law over the new baby is based on the real-life experiences of some of our members.”

“In another play, we staged a realistic portrayal of what happens on holidays in Korea, when the men sit idle while the women work up a sweat,” Jinguahua said.

After company members determine which anecdotes they will use to build their next production, they hand the material over to Kim Byung-kyun, the artistic director of Salad Theater, who writes the script.

Kim joined the company before its first production last September. Since then, he has served as the group’s director, not only guiding the productions but also offering instruction to the performers, some of whom have had limited acting experience.

“The actors perform like professionals - they have talent and artistic sensibility, both of which are hard to find in an amateur actor,” said Kim. “As an artist, I myself am motivated by seeing them trying hard, and I also learn something while teaching them,” he added.

Salad Theater has several upcoming engagements and is currently in rehearsal for a performance in June. The group is also working on a new piece, which will be presented as part of their regular season in the second half of the year.

Company members usually spend about seven hours a day, five days a week, rehearsing at their space in Munrae-dong.

Dashmaa and Jinguahua commute all the way from their respective homes in Ansan and Suwon.

“It’s not hard. Rather, it’s so much fun that the time flies when we are here,” Jinguahua said.

“It’s like an addiction. Whenever I finish a performance, I feel great. The more I perform, the more interested I am in acting,” Dashmaa said with a smile. “My husband, who used to be skeptical about my doing this, changed his mind after seeing me perform, and now he cheers me on.”

Things were not always easy for the members of the group. Language and pronunciation were particularly difficult for some of the company members to master.

“Since I’ve never acted before, it was awkward at first, but as time has passed, I’ve gotten used to it and now I’m actually enjoying it,” Dashmaa said. She added that joining the group has also helped her learn the language faster.

Life outside of the company has also been a struggle for some.

“When they first arrive, most marriage migrants are intimidated by their new surroundings, with a new language and culture to learn, and they feel vulnerable,” Dashmaa said.

That was Jinguahua’s experience when she first came to Korea. She had married a Korean man and wanted to be a “desirable Korean daughter-in-law” to satisfy her new in-laws.

“Trying to be someone else, instead of my true self, was very stressful and later I even suffered from depression,” Jinguahua said. “And after giving birth to twins 17 months ago, I wondered what my life in Korea would be like, what I could do besides running a household and raising a child.

“Then I found Salad and it gave me the strength to start over. It has not only given me the opportunity to learn about acting but shown me that I can have a dream of my own and carry it out.”

She said she hopes her experiences will help other marriage migrants do what they want to do as well.

Dashmaa said that even though there are differences between Mongolian and Korean culture, she hasn’t had to struggle to adapt to life here. However, what she found significant was “Koreans’ unique sense of ‘we,’” which is reflected in Koreans’ use of expressions like “our country,” instead of “my country,” as would be common in English.

Dashmaa and Jinguahua both acknowledged that the Korean government is making an effort to deal with the country’s growing multiethnic population, but they both said there is still room for improvement.

“When a dozen of us from all different countries come together and talk with each other, there are often quarrels and conflicts resulting from the cultural differences between us. Think about how that translates to the population of over a million expatriates in this country,” Dashmaa said. “Therefore, in addition to the policies the government is carrying out, I think it will take time and understanding for Korea to evolve into a society that is truly multicultural.”