[Viewpoint] China should be responsible leader

[Viewpoint] China should be responsible leader 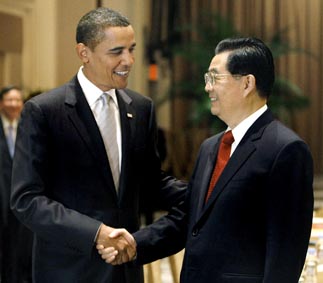 Will the 21st century usher in a new era for Asia? The question is based on the premise that the period of Western dominance on the world stage, which began with the Industrial Revolution, has ended and that history is moving toward a new age with more equilibrium between the West and East.

The rise of Asia, specifically East Asia, over the last two decades owes much to China’s rapid economic growth and influence. China, now the world’s second-largest economy, the biggest exporter and largest holder of foreign exchange reserves, has ascended to a status powerful enough to sway the global political and economic landscape.

We as Asians living in a critical era when the region can demand unprecedented power in shaping world events are required to reinvent ourselves to meet our new role. We should put aside historical distrust and hostility. We need not be self-conscious that we were a late arrival to the process of modernization, nor should we become too arrogant because of our newfound success.

Instead we should display Asian-style wisdom and compassion to help build a global community of co-prosperity and peace.

In this age with the global community becoming more integrated, we face common and urgent challenges. First, the world needs a new system to lead the world out of the financial crisis as well as establish means to improve international politics and the economy.

Second, we need collective action to address climate change and environmental and energy problems that undermine global safety and well-being. Third, we must work toward a world without the threat of nuclear war by reducing and eliminating nuclear weapons. To tackle these urgent series of tasks, the role of Asia, and China in particular, is crucial.

A broader G-20 forum has come to replace the post-war Bretton Woods monetary order that established international financial institutions like the International Monetary Fund that were largely managed by the Group of Seven major economies in addressing global economic challenges.

But not much progress can be made unless China takes a cooperative stance. In fact, the United Nations Climate Conference in Copenhagen last year produced few results because China and other developing economies heavily dependent on coal for energy failed to narrow differences with the rich advanced countries on the issue of climate change versus industrialization. To narrow this gap, leadership from China is imperative.

International attention has now shifted to the reduction and elimination of nuclear arms with last week’s Nuclear Security Summit. President Barack Obama signed a new strategic arms reduction treaty with Russian President Dmitry Medvedev in Prague early this month a year after he outlined his vision of a nuclear-free world, answering to growing global calls for denuclearization.

In the recent Nuclear Summit, Ukraine pledged to eliminate its stock of high-enriched uranium, followed by Canada and Mexico with similar commitments. They helped to set the mood ahead of the UN’s five-year review in New York of the Nonproliferation Nuclear Treaty in May. More than 20 former state heads held this year’s plenary session of the InterAction Council in Hiroshima to renew a commitment to free the world from the threat of nuclear annihilation.

The dropping of atomic bombs on Hiroshima and Nagasaki killed millions of Japanese and ethnic Koreans and should be remembered as an example of the grave nuclear danger faced by the region as well as the entire international community.

Denuclearization efforts in Asia cannot move forward without China’s leadership. The race to stock up on weapons-grade nuclear material in the Middle East and between rivals India and Pakistan has reached alarming levels.

But all countries in East Asia are under nuclear threat and sincerely desire to be free from fear. Korea and Japan as well as members of the Association of Southeast Asian Nations tolerate China as the sole legitimate nuclear power in the region.

China must respect such tolerance from its regional neighbors and stand at the forefront in pursuing the common goal of making East Asia free from nuclear threats and in discouraging other countries from becoming new nuclear powers in the region.

China played a decisive role in writing a new chapter in history and ending the Cold War by normalizing ties with the United States in the 1970s and then adopting an open market system. History again calls on China for innovative action and leadership to help achieve peace and stability in the “Asian century.”

*The writer, a former prime minister, is adviser to the JoongAng Ilbo.
Translation by the JoongAng Daily staff.